All Together Now: "Parade Morgan" Bookends by Gladys Brown Edwards 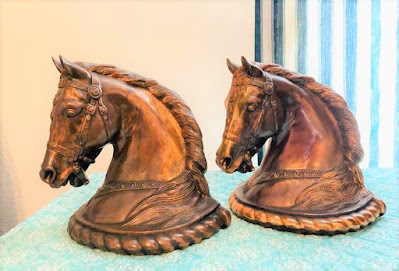 Researching equine history from the 1940s and 1950s reminds me that, as I've said before, Southern California was a very "horsey" place back then.  It always pleases, but never surprises, me to discover previously unknown connections between the horses and the people who lived in the area. And it's not uncommon (since I look for them) for me to uncover details of model horse history as well. The story of the Parade Morgan bookends illustrates one of those connections.

When my dear friend Linda passed away last fall, I became the new owner of her set of Morgan horse bookends designed by Gladys Brown Edwards. Linda and her father had bred, raised, and shown Morgans in Galesburg, Illinois in the 1950s-60s, and I think it is safe to say that even though she loved pretty much all things equine, the Morgan was her favorite breed.

Fortunately for equine historians (and model horse lovers), GBE and her husband Cecil Edwards saved the correspondence relating to the origins of this handsome set of bookends.  The letters are in the Cecil and Gladys Brown Edwards collection at the W. K. Kellogg Arabian Horse Library at Cal Poly Pomona.

Owning a set of the bookends gave me a chance to review my notes on their creation, which show a direct connection between the artist and another Morgan horse lover who also lived in Southern California in the post-World War II era.

One of the letters is from Keith L. Morse, Secretary-Treasurer of the Morgan Horse Association of the West. It's dated October 26, 1946, and is addressed to Cecil, thanking him for sending the club one of the bookends that Gladys had designed.

Morse's letter identifies the inspiration for the headstudy as the Morgan stallion Abbott, a dark chestnut horse foaled in 1930, bred by the USDA in Vermont.  Here's a picture of him. 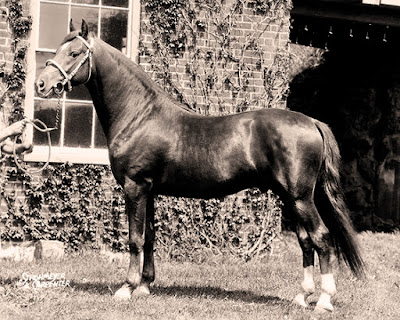 The Morgan Horse Association of the West had been organized in the summer of 1945, and had about 75 or more active members by 1947, according to an article in the February 1947 edition of The Morgan Horse magazine. The group's membership varied "from the owners of one or two Morgan saddle horses and small breeders to breeders of large numbers."
The "Parade Morgan" bookends were advertised in horse publications during the late 1940s. 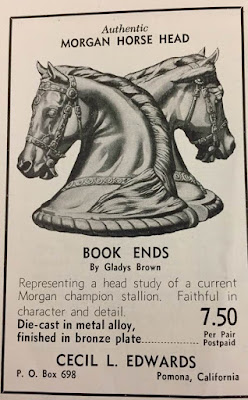 It's no wonder they were, and still are, prized by collectors. The level of detail is amazing. 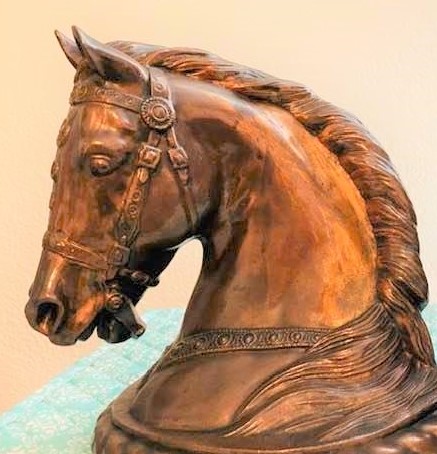 However, the Morgan horse bookend was not the first connection between Merle Little and Gladys Brown. Merle had organized all the equestrian activities for the  May 1933 Pioneer Day parade and horse show in the city of Monrovia, right up the road from Pomona; the Monrovia News-Post documented his trip to the Kellogg Ranch to recruit horses and riders for the events.

Merle was successful in his efforts; one of the riders who participated in Pioneer Day was Miss Gladys Brown, riding the Kellogg Arabian mare Valencia.

Merle himself won an award as a participant in the parade, riding one of his well-known pinto horses with a silver-mounted saddle.
Kellogg Ranch-related sidebar: The Azusa Boy Scouts group also participated in the 1933 Pioneer Day parade, led by young Hugo de Groot riding the Welsh Pony *Kilhendre Celtic Silverlight, a gift from W. K. Kellogg to the Scout troop in 1928. Kellogg and his wife had received the pony as a gift from English Arabian horse breeder Judith Blunt-Lytton, better known as Lady Wentworth. Kellogg imported many of his best-known Arabian horses from her Crabbet Stud.
Back to the bookends: A copy of another letter in the collection at WKKAHL is dated 9 January 1949, from Cecil Edwards to The Morgan Horse Magazine in Woodstock, Vermont. In it he mentions that the magazine had one of Gladys' Morgan bookends in its offices, and that the Morgan Horse Association of the West used the bookends as trophies in their horse shows.
Cecil's letter enclosed a photo of a pencil drawing by Gladys of an "ideal" Morgan stallion; it was a composite of several mostly unnamed Southern California Morgan sires. Cecil noted, "A local horse, King Shoshone, owned by Mel Morse of Arcadia figured prominently in the drawing."

With a very quick turnaround time, The Morgan Horse magazine featured the drawing on the cover of its February 1949 edition.
What interested me about this story was not just the endorsement of the "Parade Morgan" horse head bookends. It was also the name of the then-president of the Morgan Horse Association of the West, in the upper right-hand corner of the first letter. His name was Merle H. Little. 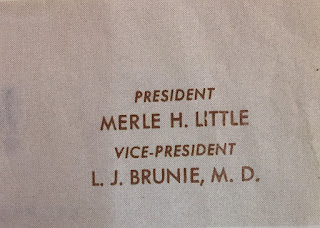 Hagen-Renaker model horse collectors may remember that Merle Little was the Monrovia/Duarte, California horse rancher who owned at least two (probably more, in my opinion) of the horses that artist Maureen Love used in the 1950s as inspiration for her equine designs for Hagen-Renaker, Inc.: Lippitt Morman and Forever Amber!
So we can make another connection in this story: We know from one of Gladys' letters at WKKAHL that she knew Maureen Love, and (obviously) so did Merle Little.
The world of the horse in the post-World War II era in Southern California was indeed small. And we can still see the ghosts of those human relationships in the model horse figurines and bookends on our shelves in the early twenty-first century.
Here's a link to my blog post on Lippitt Morman:
https://californiahorsehistory.blogspot.com/2020/04/lippitt-morman.html?fbclid=IwAR3sPgRcKELwyYRkKkvraMQwxMF4Fky4eWYJbIA4ESf3ZnfjEW0VTAb21H8

Posted by Teresa Rogers at 5:14 PM