A Pony for Christmas (although a Model Horse Will Do)

I was one of those little kids who always asked my parents for a pony (or a horse) for Christmas.  I never got one, of course; I say "of course" because we didn't have the space to own a horse or the money to board it somewhere nearby.  And I knew that.  But it didn't keep me from asking.

The tradition of asking for a pony (or a horse) for Christmas is a venerable one. I'm sure that the origins of the pony-for-Christmas go back centuries, but I was interested to see what references to kids and horses and holidays turned up online. So I went to Newspapers.com and did a search for the phrase "pony for Christmas."

One of the oldest examples of that phrase being used in one of the archived newspapers was in the 1887 Philadelphia Times. With a nod to Louisa May Alcott, the paper described the lives of several "little men and women" of the area, noting that little Emma Rutter was being trained by her older sisters to ask Santa Claus to bring her a pony for Christmas. 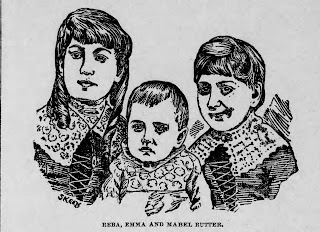 A somewhat saccharine story was published in several 1910 newspapers: the tale of Little Boy Bulger, who was naughty at Christmastime, but repented of his evil ways, apologized to his parents, and was rewarded with a pony as a New Year's present. 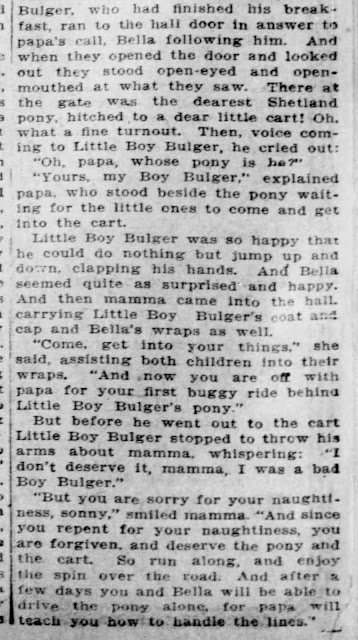 I found many examples of ads for Ponies for Christmas.  This one from Indiana dates to 1889.

Just before Christmas 1910, the Allentown (PA) Democrat carried this ad that promoted the health benefits of pony ownership, as well as the fact that a pony made an "attractive and useful lawn ornament." 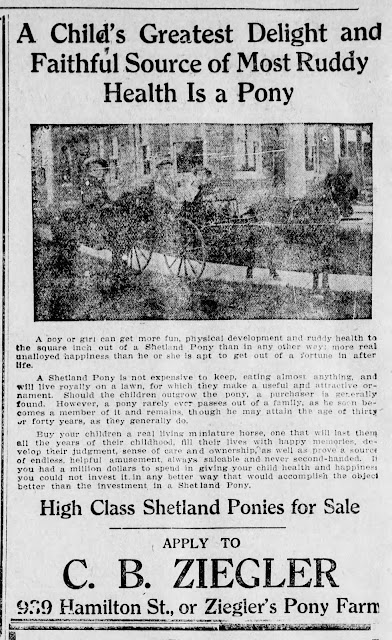 The Pampa (TX) Daily News showed us the conflict that could occur when one parent approved of A Pony For Christmas and the other didn't, circa Christmas 1936. 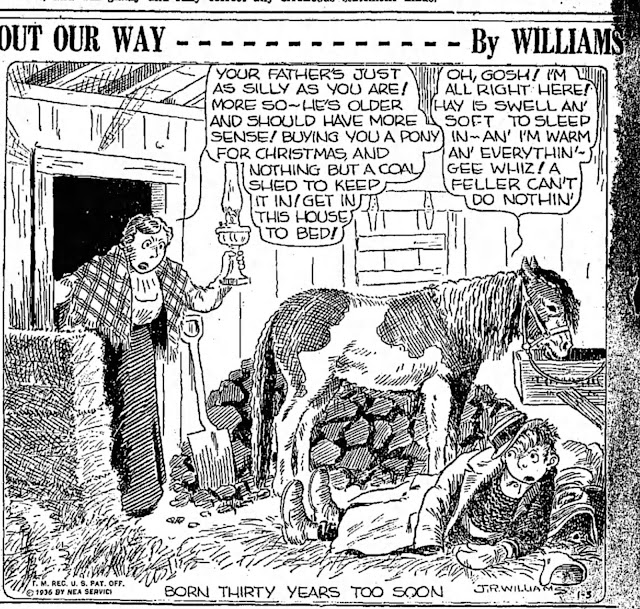 By the 1950s, it was even harder for parents to ignore the idea of a horse as a companion because there were so many of them on television, ridden by cowboy heroes. 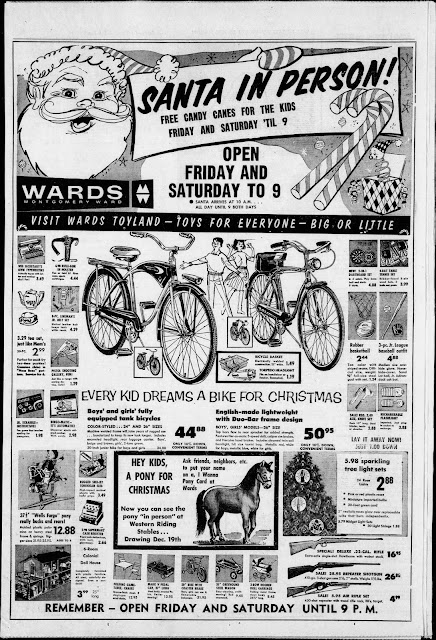 Unlike the protagonist in Lincoln Steffins' classic story "A Miserable, Merry Christmas," I never said that if I couldn't have a horse for Christmas I wanted nothing at all. I always settled for receiving a new model horse figurine, and once my parents thought I was Too Old For Things Like That, I started buying myself a model horse every Christmas.

Last Christmas, I bought myself a little Hagen-Renaker mini Western Pony foal. This darling little fellow was designed by Maureen Love and only released in Spring and Fall 1957.  He has been through the wars but he has a safe home on my shelves now. 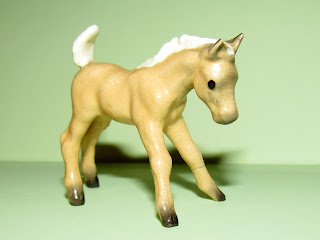 You can read "A Miserable, Merry Christmas" for free here:

Posted by Teresa Rogers at 2:48 PM No comments:

This is another in a continuing occasional series about model horses that could be ordered through horse magazine ads in the 1950s and 1960s.

Another Western Horseman magazine ad, from November 1950, shows us a selection of horse figurines -- or at least HSOs (Horse-Shaped Objects) -- available from Dorothy Kindell Ceramics, a Southern California pottery that operated in the 1940s and 1950s. 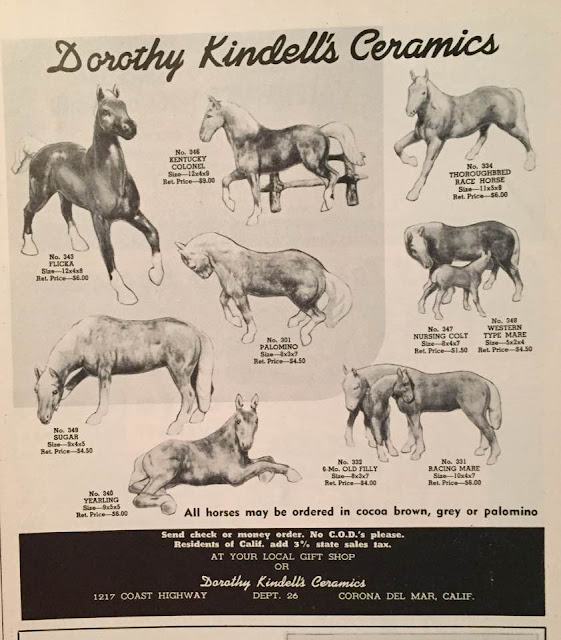 Some of the names reflect popular horse breeds and colors; for example, "Kentucky Colonel" must have represented an American Saddlebred.  And "Flicka" was inspired by literature; the 1941 novel My Friend Flicka by Mary O'Hara had been made into a film in 1943 (and would inspire a TV series in 1956). 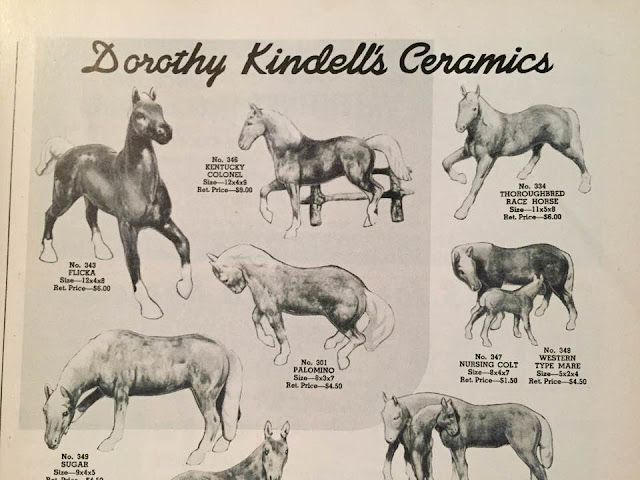 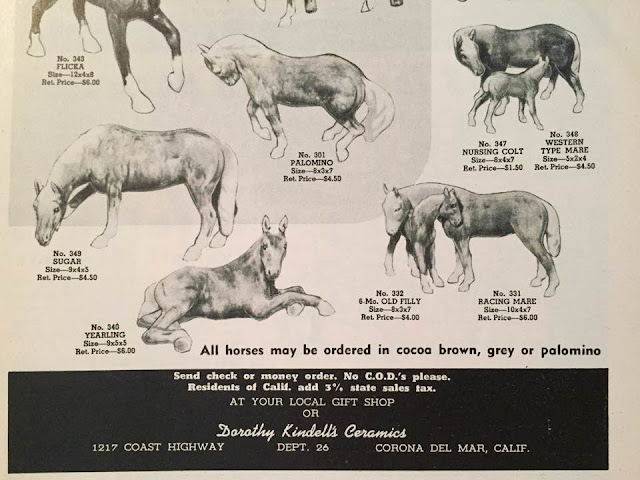 I found a photo from an eBay auction of a figurine that appears to be by Dorothy Kindell. 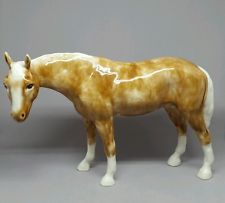 Posted by Teresa Rogers at 11:14 AM No comments: