It's July, and that means it's time for the model horse world to focus its interest on Lexington, Kentucky and the annual Breyerfest gathering. In honor of the event, here's a look back at one of the most beloved Breyer model horse designs of all time. 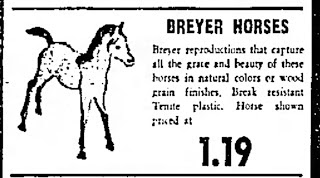 The old newspaper ads from the late 1950s and early 1960s show him (or her): one of the most popular, most ubiquitous of all model horse figurines.

He (or she) is the Family Arabian Foal, by Breyer Animal Creations.  And he was My First Breyer Horse. This, the first "real" model horse figurine my parents gave me, came (if I recall correctly) from the Toy Cottage in Phoenix. 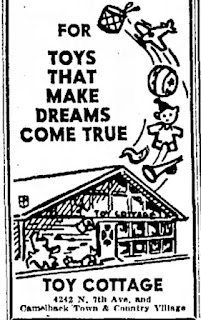 Looking back, it made sense that my parents gave me a smaller, less-expensive Breyer horse as a gift. Ours was a typical one-income mid-century family; the Breyer foals didn't cost as much as the adult horses, as this other newspaper ad from "back in the day" demonstrates. 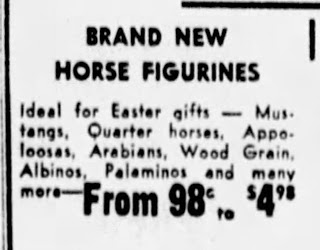 I have a very clear memory of receiving this Family Arabian Foal -- I must have been about five or six years old at the time.  I knew very little about real horses, and I assumed that if a horse had a white mark on its forehead, that mark was called a star. Thus the name of my first Breyer, the Family Arab Foal, was White Star.

"That mark is called a blaze, Honey," my dad explained carefully, somehow knowing that to challenge a six-year-old female in love with a plastic horse was asking for trouble.

I thought for a minute. "If you take his white blaze and his four white stockings and arrange them just right, they make a star. His NAME is WHITE STAR," I said.

White Star it was.

White Star joined a small collection of farm animals I'd already squirreled away in my bedroom.  For my next birthday, I received another Family Arab Foal, this time in glossy palomino. Her name was Dusty.

And then for my eighth birthday, I received Pearl, the Family Arab Mare. She was their mom.

At some point in my childhood, My Three Breyers posed for a group shot in the back yard, along with one of my plastic farm set horses. 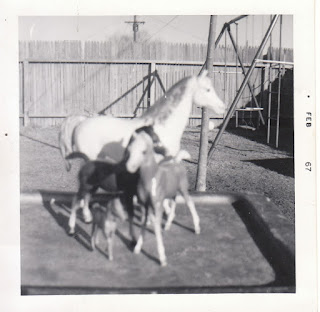 And that was about the time my parents stopped buying me model horses.  It must have been a bit of a shock for Mom and Dad -- neither of whom was a collector per se, although Dad had a few old coins -- to discover that they'd spawned a model horse collector.  Perhaps they just assumed that liking horses was "just a phase" that a lot of kids went through back then, because of the influence of pop culture.

Other relatives kept up the tradition of buying me horse figurines, though.  My grandmother was my chief enabler. And any visit to a variety store, toy store, tourist trap on vacation found the young me seeking out model horse figurines -- plastic and later ceramic -- I was willing to save my allowance and buy them, and argue (respectfully but firmly) for my right to have a collection of horse figurines in my room.

A lot of younger people I meet have no real understanding of how important the horse was in American culture during the mid-20th century. Cowboys and Indians, knights in shining armor, heroines, heroes and villains on horseback all swept across Saturday matinee silver screens and evening feature films, and then later on the small screen, inspiring generations of Americans to understand that horses help us fulfill our dreams.

If you were a kid watching TV in the 1950s and early 1960s, you saw images of heroic horses on a daily basis; they were the colleagues and best friends of everyone from Annie Oakley to Zorro. Find someone between about 50 and 90 years old, and ask them who their favorite movie or TV cowboys were: Gene Autry. Hopalong Cassidy. Roy Rogers and Dale Evans, and others.

Horse books were equally wildly popular. We horse-loving kids asked for, and often received, horse books by Marguerite Henry, Walter Farley and other authors as gifts. And if we didn't own these books, we kept the copies at the nearest library continually checked-out.

Time passes. Toys get broken and thrown away. One loses interest in tiny horse figurines, or your mom decides you're "too old" for model horses and she donates them to charity, or gives them to a younger sibling to destroy.

I admit, over the years I have not kept every single model horse that set hoof on my shelves.  Some were sold or traded away when I got older; many of the others were lost in a major earthquake a few years back. (If the "seismic event" is strong enough to take part of your house down, no amount of Quake-Hold is going to protect your model horse collection.)

But I still have my original glossy honey bay Breyer Family Arabian foal.  He's still here, in pride of place on my Horse Shelves. 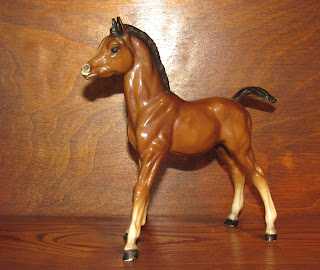 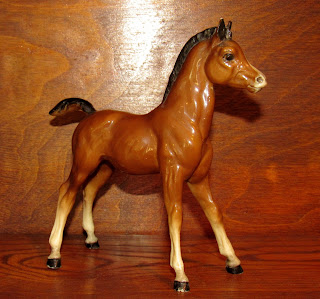 And he still stands next to his best friend, the glossy palomino Breyer Family Arabian foal, Dusty. 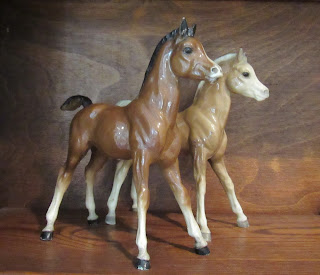 Back on their regular shelf, they live with their mom, the Family Arabian Mare called Pearl, the small horse from the farm set, and a few dozen of their friends.

(I just noticed that I never did get the Family Arab Foal in the gray blanket colorway. Maybe I can find one at Breyerfest.....) 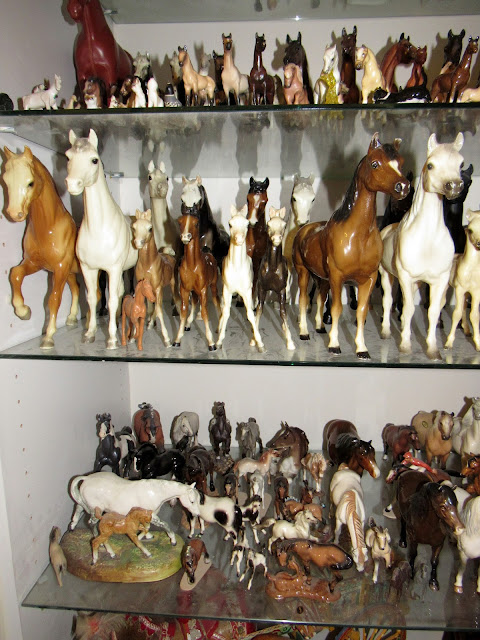 Did you know that the designs of the Breyer Family Arab mare and foal were the result of a 1959 lawsuit?  Kirsten Wellman has written brilliantly about this bit of model horse history: