Shout Out to the Braymere Custom Saddlery Blog!

Our fellow model horse enthusiast Jennifer, who writes Braymere Custom Saddlery's most excellent blog, just featured a slightly updated version of my article on  pre-1960 model horse collectors in the news.  It's fun to be a guest blogger from time to time.

Posted by Teresa Rogers at 5:16 PM No comments: 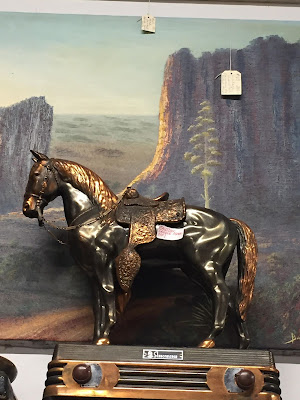 I don't collect metal horse figurines. So many of them are so cool, but my shelf space is limited and they don't always mix well with the fragile ceramic horses because of the sheer weight of the metal!  One good "seismic event" and there goes the herd....

But last week at an antique mall I spotted a large, multitasking metal horse at an antique mall that I thought would look nice if displayed away from the other, more fragile model horses. So, after haggling about the price a bit, I brought it home. 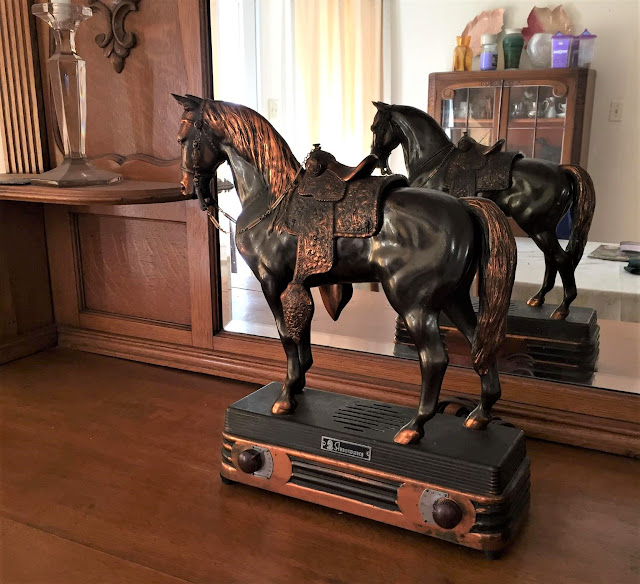 My new equine collectible is an Abbotwares Western horse radio.  Abbotwares was a Los Angeles-based firm that produced and marketed decorative metal radios in the years just after World War II.  The company made several variations on this theme of horse-in-Western-tack, as well as versions showing two racing Thoroughbreds with jockeys, a rearing horse with a cowboy, a hula girl, and Lady Godiva on top of the tube radio base. 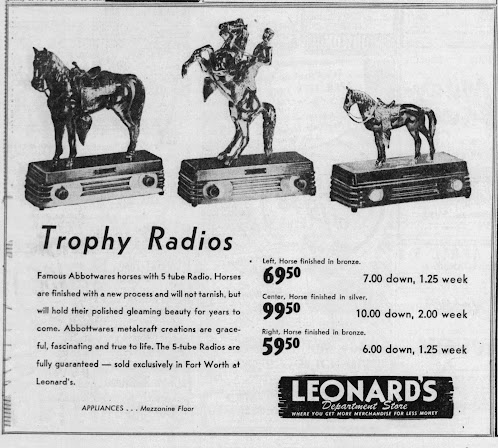 Ad for Abbotwares horse radios, Fort Worth, Texas Star-Telegram,
7 March 1948. They were not cheap!
It is huge, and it weighs close to 10 pounds. I photographed it next to the iconic Breyer Family Arab Stallion to show the scale. 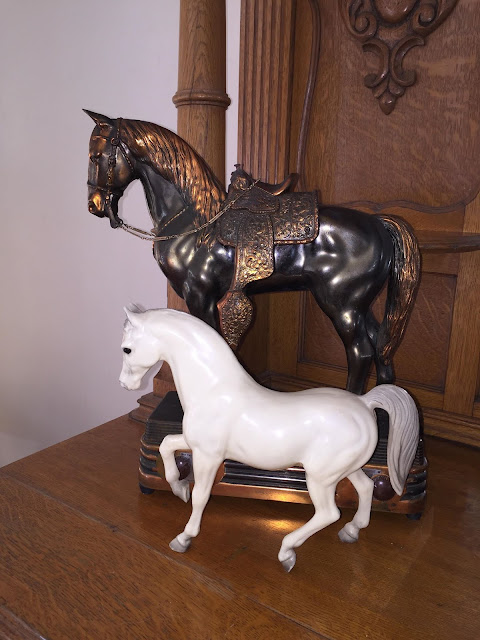 The saddle on my Western horse radio is separate from the body of the animal.  (Other versions of the Western horse radio have a horse with molded-on saddle.) The original reins were lost, so a previous owner substituted an old costume jewelry necklace (minus the clasp).  The radio is true to its pre-transistor day, with vacuum tubes and other post-war elements. 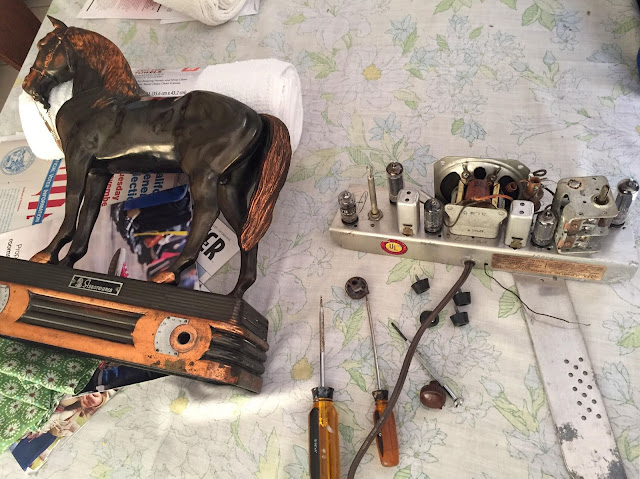 I plugged it in cautiously, and was pleased to find that the radio does seem to work (once the tubes have warmed up), but not too well. Expert help has been summoned, and I know that someday soon the Western horse radio will be functional as well as decorative. (Although there's nothing wrong with being merely decorative.)

The online archive of Billboard magazine shows an ad on page 77 for Abbotwares radios in the November 15, 1947 issue -- just in time for Christmas in that year. The Western horses seem to be somewhat smaller than the example I found.

As you scroll through the pages, you'll see that the Western horse radio was being marketed in the same publication as other items that combined technology with decoration: juke boxes, gumball machines, coin-operated radios, slot machines, pinball machines...all signs of the times.

And maybe if I'm very lucky, when I turn the dial on the old Western horse radio, I'll find a station that plays music from that era...maybe even a song sung by Gene Autry.

For more information on metal horse figurines, I recommend books by Carolyn Martin:

(A version of this post originally appeared in 2014 in my other blog, The Estate Sale Chronicles.)

We've talked before about the importance of equine art in the life and research of model horse collectors.

I found a somewhat hidden treasure at an estate sale back in 2014.  In a bedroom closet, in a box, underneath a bunch of mass-produced prints "suitable for framing" (that no one ever bothered to frame), was an old matted picture of three horses: a stallion, a mare, and a foal. They were extremely well-drawn. 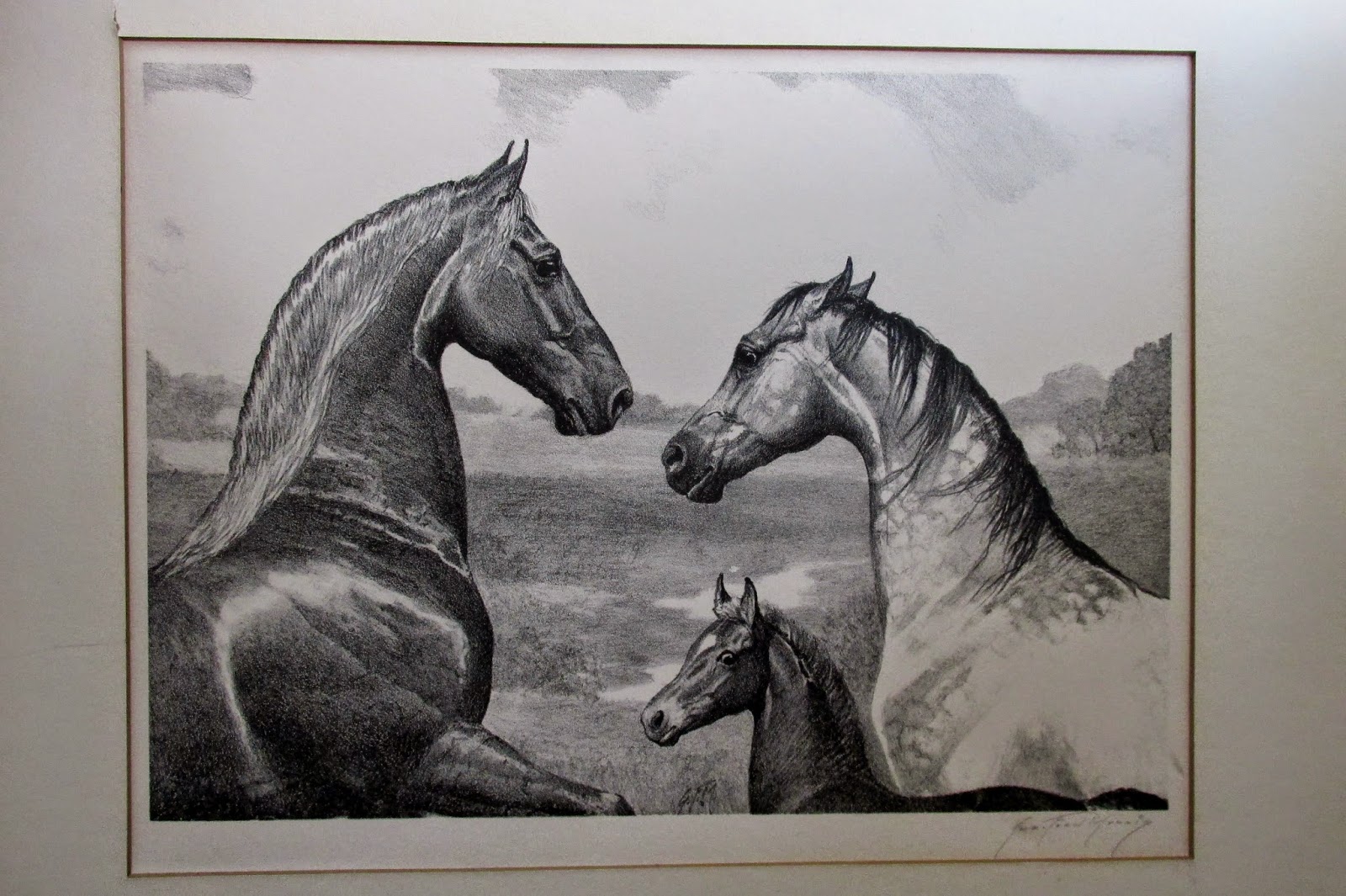 Even though I'd  never seen this particular work before, the name of the artist popped into my head almost before I could think:

And indeed the picture was signed, in pencil, on the lower right, next to the colt. 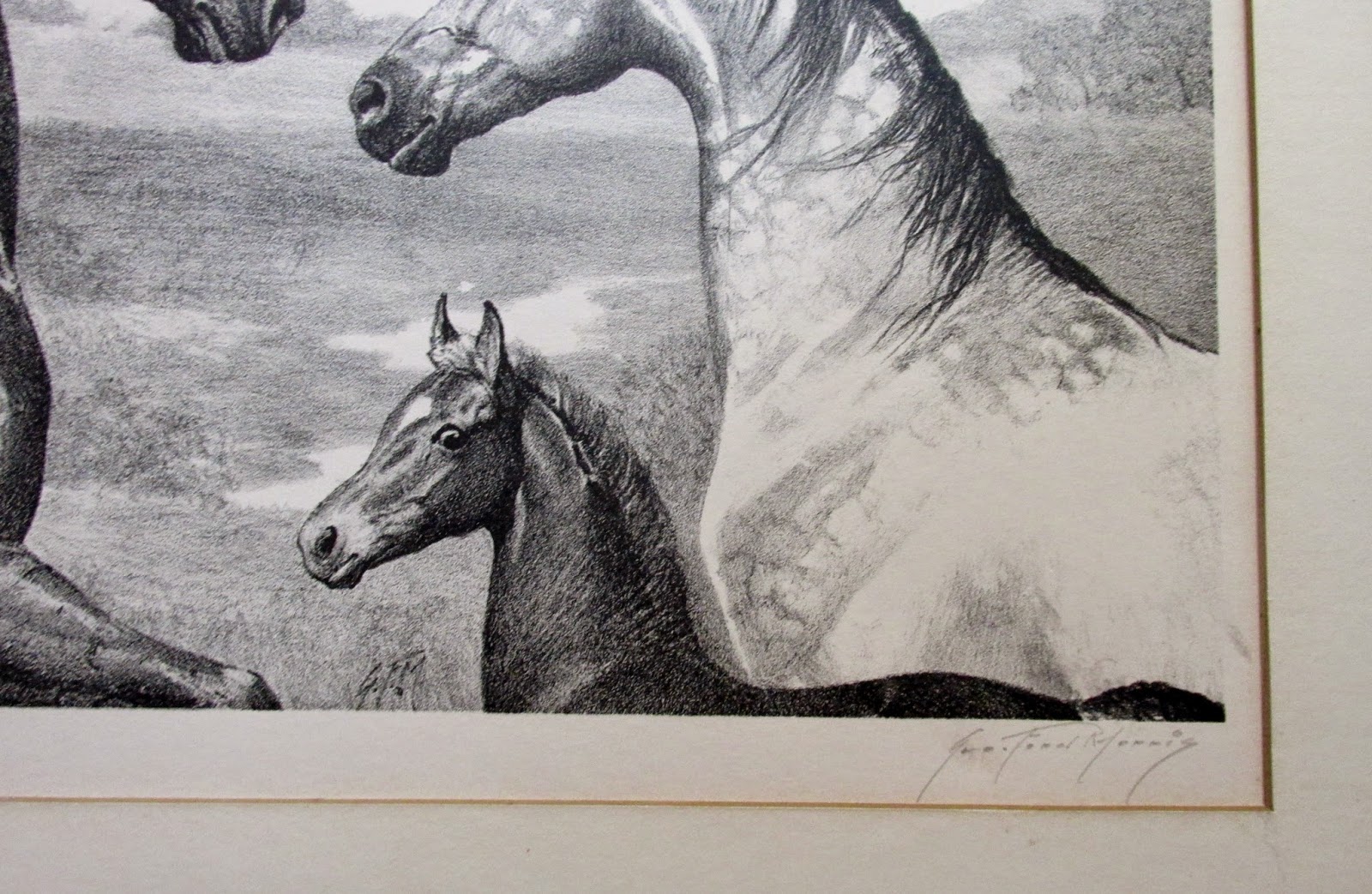 The picture is a lithograph called "Family of Champions" by American artist George Ford Morris (1873-1960).  Morris has been described as the foremost American equestrian artist of his time.  He was mostly self-taught; his original art today commands serious prices.  One blogger notes:

In his day there was no finer American equestrian artist than George Ford Morris. By painting horses, riders and their owners, Morris captured on canvas the ever-changing world of "Town and Country" Americana.

Even though many breeds were represented in his work, George Ford Morris is perhaps most associated with the American Saddlebred horse.  And this picture of the "Family of Champions" is an early 20th century equine equivalent of an official court portrait of William, Kate and baby George.

The stallion in the lithograph was the famous show horse and sire Bourbon King, a chestnut American Saddlebred stallion foaled in 1900. 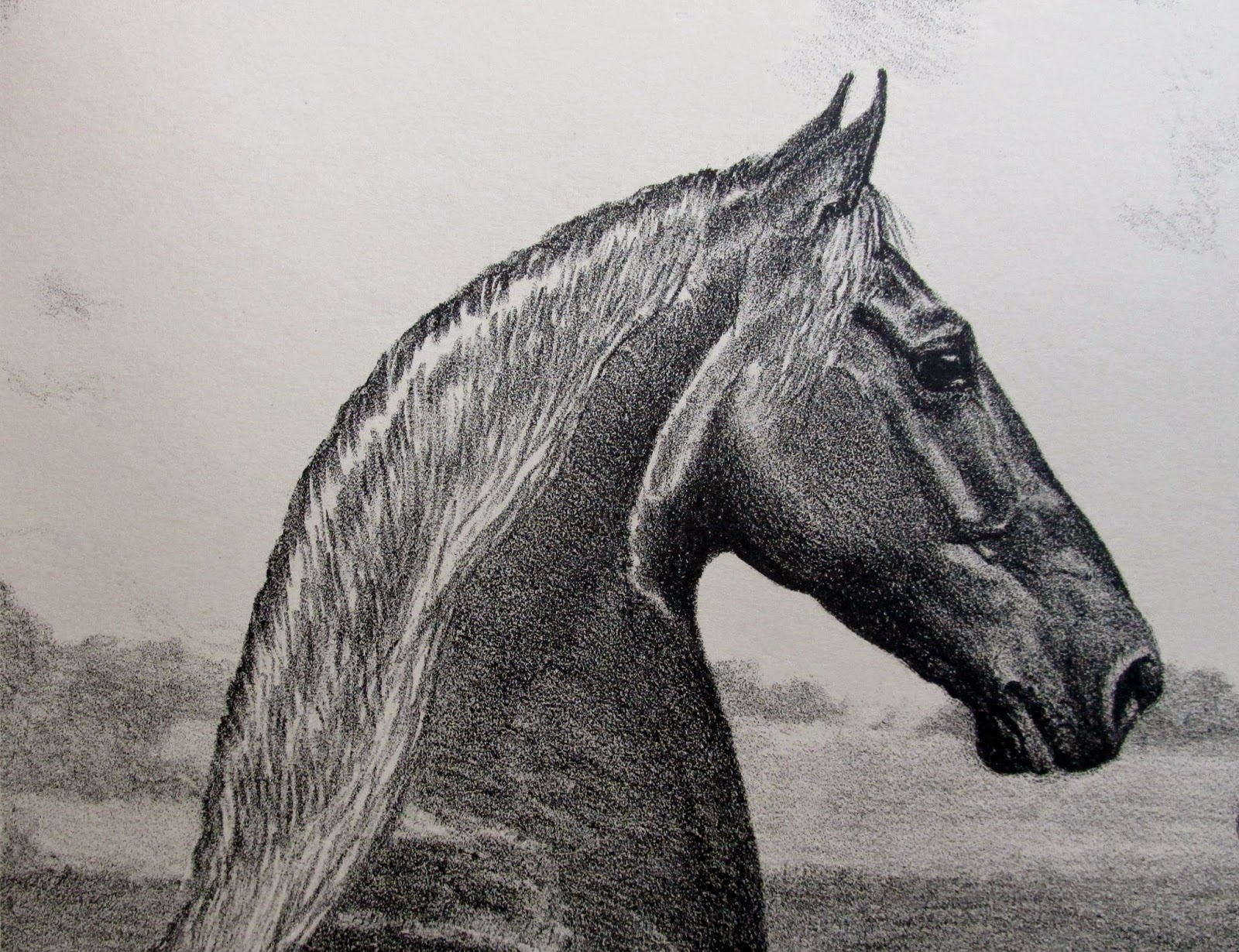 Here's a photograph of the real-life Bourbon King. 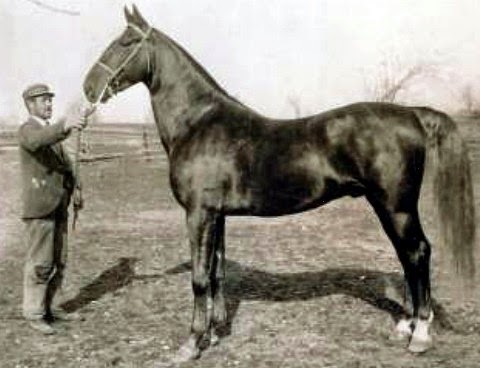 The gray mare was Princess Eugenia, foaled in 1909. 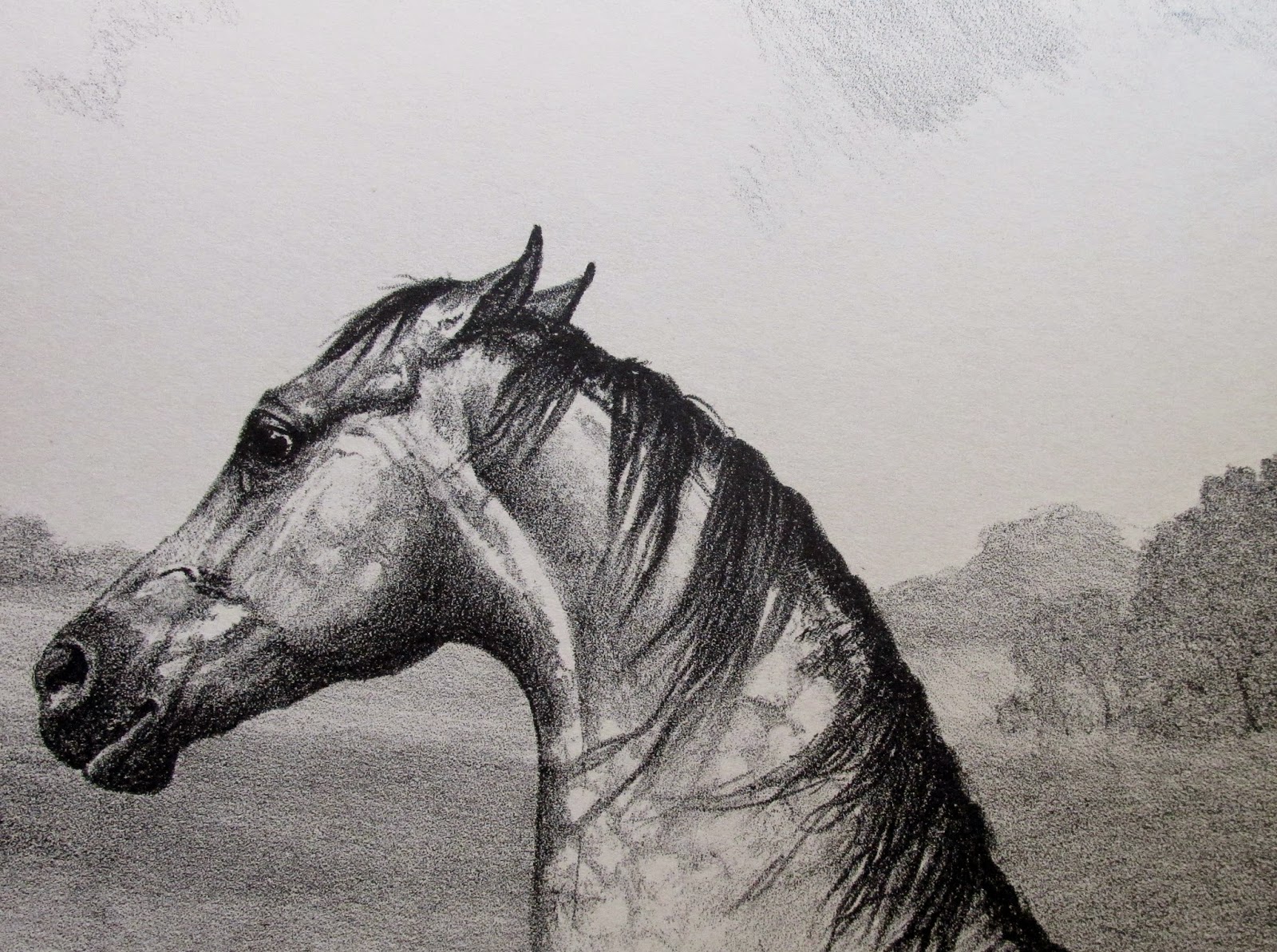 Here she is, in real life. 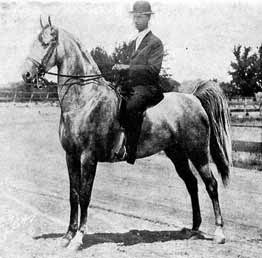 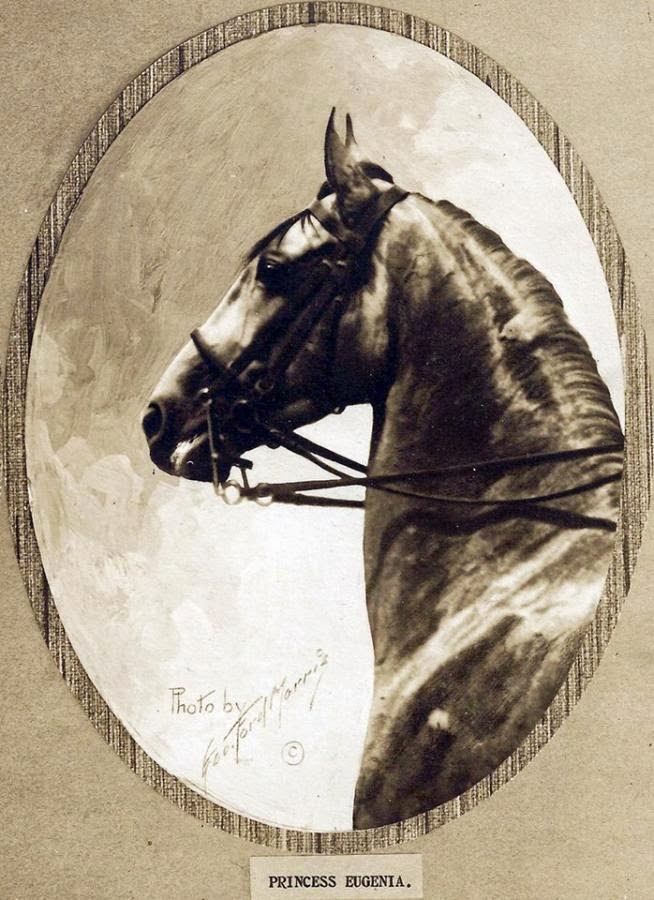 And the chestnut colt was King's Genius, foaled in 1924. 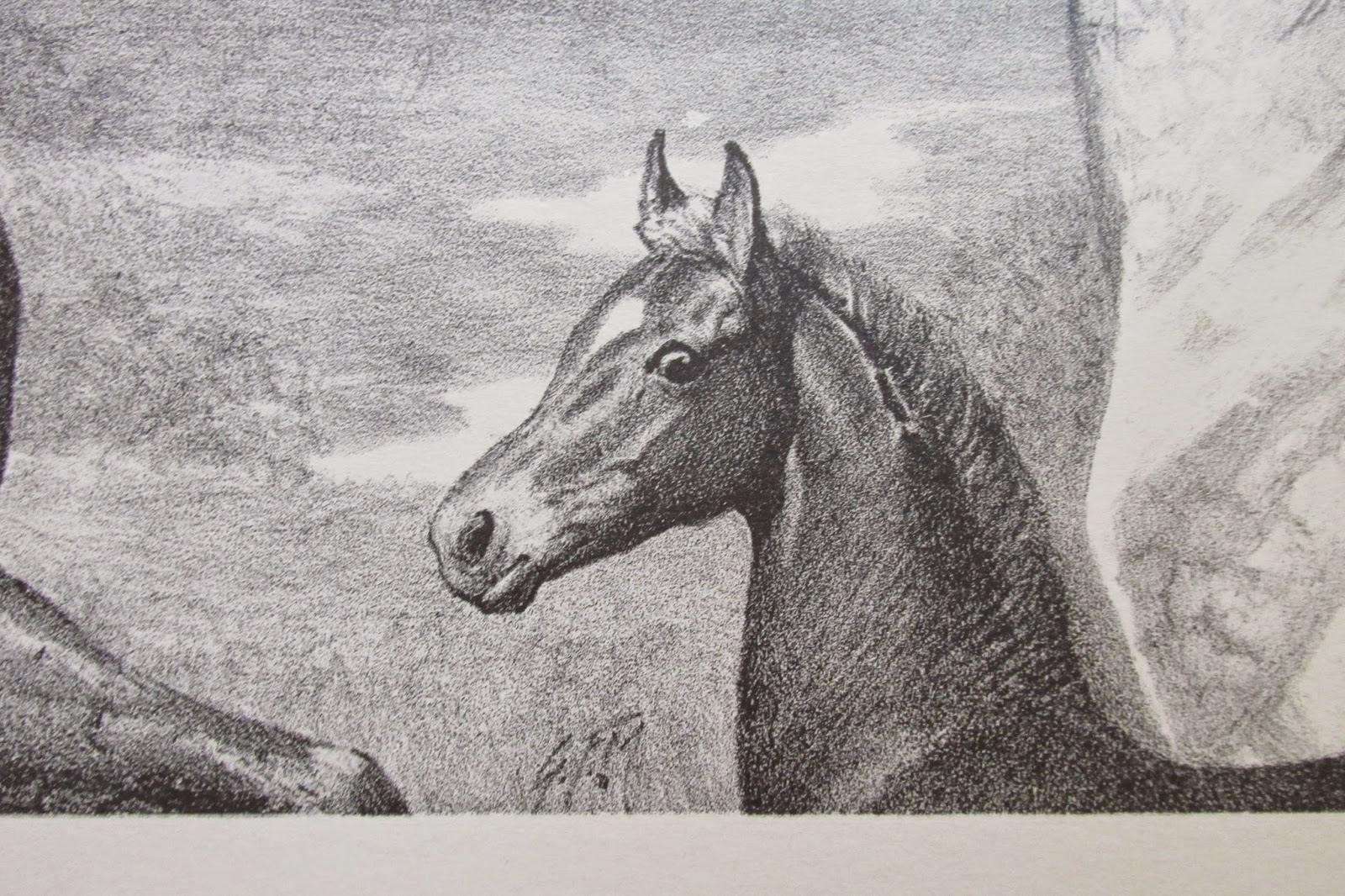 King's Genius grew up to be quite a handsome fellow, a champion show horse and sire of champions. 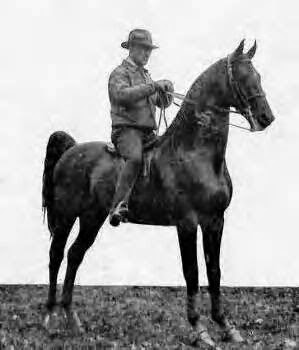 Here's a blog page with some of GFM's art:

http://upon-a-white-horse.blogspot.com/2012/10/george-ford-morris.html
Here's a link to an art gallery website with a short biography of George Ford Morris:

Ed and Sheri Alcorn have a wonderful website with pictures of many pieces of art they own by George Ford Morris.  It's also a very useful resource for information on ceramic animals produced by Hagen-Renaker, Inc.

Here's an article on the history of the American Saddebred:  http://www.asha.net/Breed-History

Posted by Teresa Rogers at 8:28 AM No comments:

Once again, researching the history of model horse figurines in the United States has led me down the trail of real horse history.

We've talked in the past about the mid-twentieth century practice of ordering model horses through the mail, for holidays, birthdays, etc.  We saw ads for Breyers, Hartlands, and Hagen-Renakers in horse magazines as well as (forthe plastic models) catalogs for major retailers like Sears, Montgomery Ward, JC Penney, and Spiegel.

It was the heyday of the TV cowboy, after all, and scores of American youngsters received model horses as gifts -- or, if we could afford them, we bought them ourselves.  Some model horse collectors owned real horses; to the rest of us, the model horse took the much smaller, less expensive, low-maintenance place (temporarily or always) of a living, breathing equine.

While looking for examples of mail order catalog model horses, I came across the Spring-Summer 1960 Spiegel catalog, and in it the evidence of a small piece of real 1950s horse history. It was a time in our history when you could order live animals -- dogs, birds, monkeys, hamsters, coatimundis (yes), and more -- from mail order catalogs. 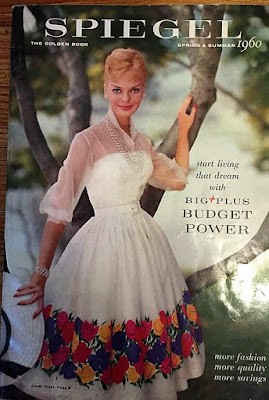 I was disappointed, but not really surprised, not to find model horses in this non-holiday issue of the catalog. In the back of this volume, though, I spotted that saddles and bridles for real horses could be ordered and shipped to customers.... 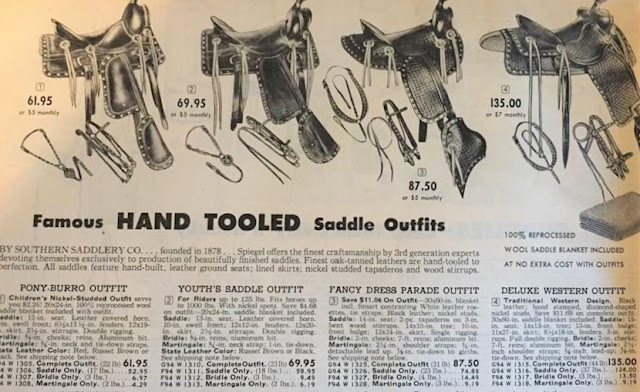 ...As well as real, live, Shetland Ponies and burros.  Adult ponies, without tack, were about $300 and Shetland colts up to a year old, $180.  A young burro cost about $80. And they took time payments. 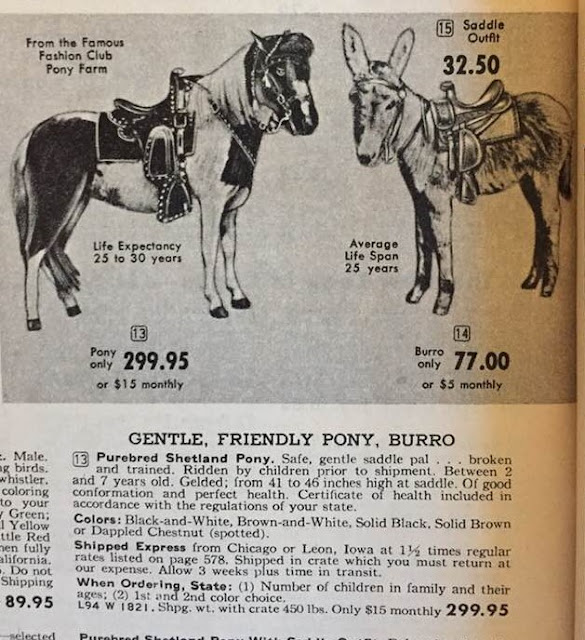 These listings are placed towards the end of the catalog, after the farm and pet supplies and before the life-size chart that allows you to measure your foot size for shoes. 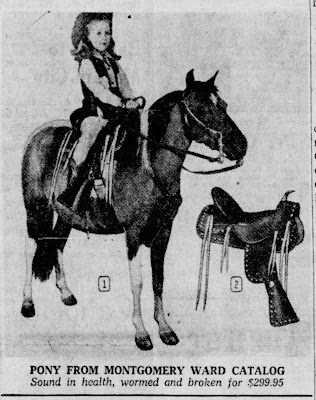 I read through my research on the subject of buying ponies, burros, and other animals from catalogs with mixed feelings.  It's nothing new to have an animal shipped by rail or by truck from Point A to Point B.  Still, I imagined what the life of a mail-order pony or burro might have been if its new owners knew nothing about horse care -- to say nothing of its overland journey, shipped in a crate (which the owners had to return) to its excited new young masters or mistresses. 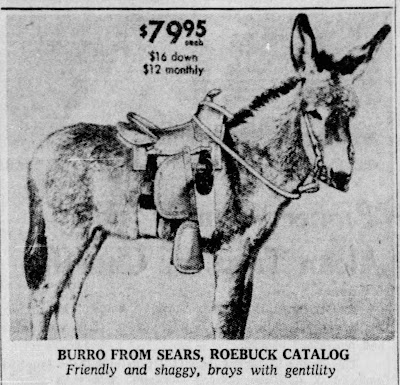 News stories from that era say that Spiegel had begun offering mail-order Shetlands and burros in 1954. This 1960 Spiegel ad shows the source of these Shetlands: the Fashion Club Pony Farm.  The Fashion Club was founded by Gene Harris of Chicago. Its branches in Leon, Iowa and Libertyville, Illinois sold thousands of ponies in person and to mail order vendors.

Spiegel wasn't the only catalog selling small equines in the late 1950s-early 1960s.  The Chicago Tribune, June 30, 1956, announced that Sears and Montgomery Wards were offering Shetlands and burros as well. 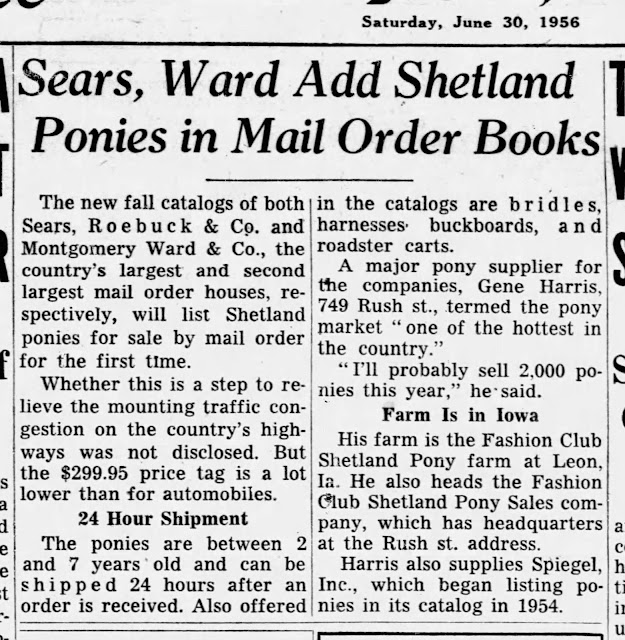 The Des Moines Tribune had published an article on Harris the previous year.  In it, Harris was quoted as saying, "There'll be a pony in every suburban backyard someday."  Harris also said that a Shetland Pony "needs no care" would "grow fat" cropping its owners' lawn.

I was able to trace one source of mail-order burros through articles in the Arizona Republic, April 3, 1955.  It and other stories described the mail order burro business of Dr. Fred Schmidt's Poverty Flat Ranch in Douglas, Arizona. 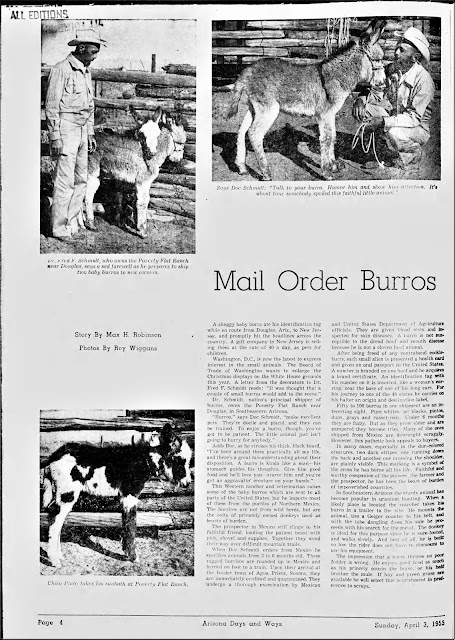 The article says a gift company in New Jersey was selling 40 burros a day. For his mail order house customers in the midwest and eastern US, Schmidt would order 50 to 100 burros, 3 to 6 months old, from sources in Mexico. 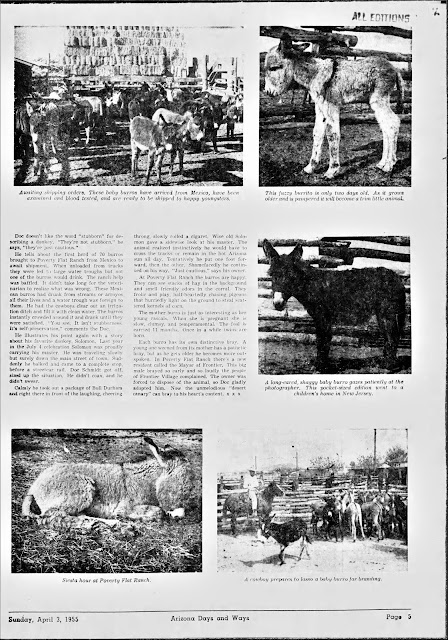 The Arizona Daily Star, April 1, 1956 told more about Schmidt's burro sales. He describes burros as "wonderful pets for youngsters," as loyal as dogs.

This news story says Schmidt foresaw the day when the burro supply from Mexico would start to dry up, so he planned ahead and had 200 jennies (female burros) at his ranch to ensure he would have an ample supply of young burros to sell.

Not all small equines from major retailers came through catalogs. Sears sold Shetland ponies from at least some of their bricks-and-mortar, as this May 31, 1959 ad in the Nashville Tennessean shows:

With advertising and news stories as persuasive as this, how was a parent to explain to a child that not all suburban zoning laws allowed livestock to be kept in a small backyard? How to counter the published claim that a Shetland pony was "no trouble," and the implication that it only needed to graze on the lawn to be fat and healthy? Some newspaper articles from that era describe anxious parents going so far as to remove the catalog pages showing the real ponies and burros while their children slept.

Eventually the fad of the mail order equine ran its course. The Arizona Republic, June 20, 1958 reported that more than 4,000 burros had been sold "back east" to date, and supplies were running low.

And a classified ad in the Des Moines Register, September 9, 1962, announced that the Fashion Club Pony Farm was having a Closing Out Farm Sale. 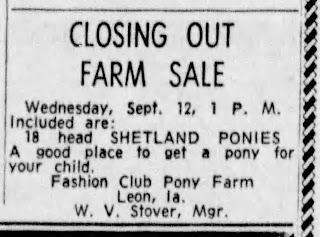