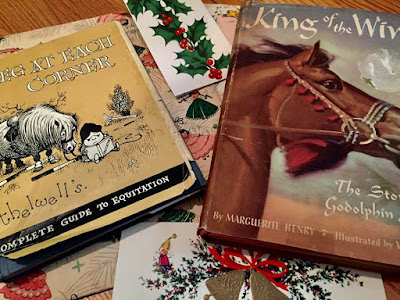 Of course we always wanted model horses for Christmas.  But a really good horse book was also acceptable!

Looking through some late 1950s-early 1960s issues of The Horse Lover's magazine, I found an interesting ad for horse books. 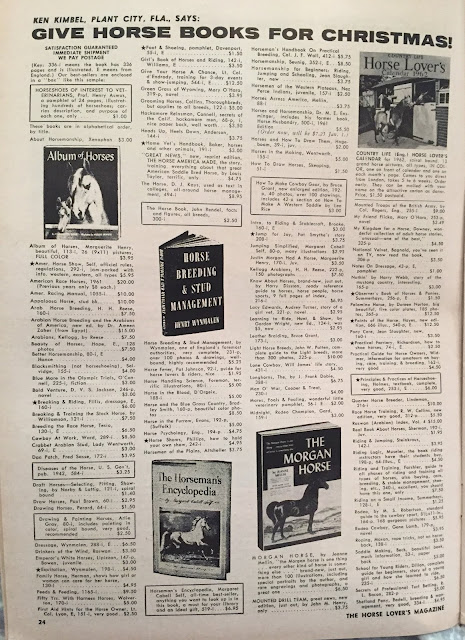 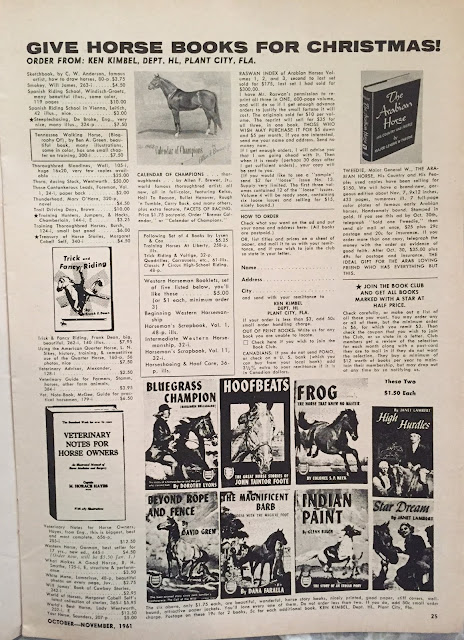 The seller offers fiction and non-fiction books, so there would be "something for everyone" who was a horse lover. 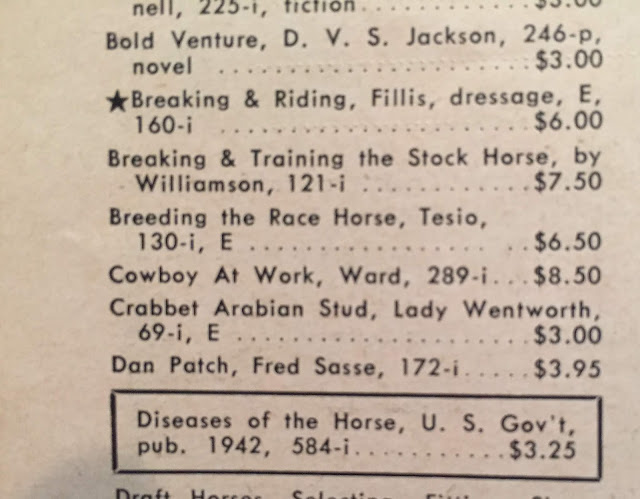 If I'd had $3.00 to spend back then, and a little foresight, I would have gotten the Crabbet Arabian Stud book by Lady Wentworth.  It sells for about 15 times that amount now. 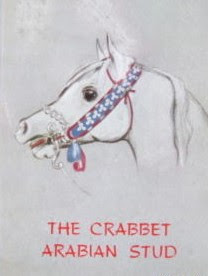 I first saw a copy at the British Library in London earlier this year; I think it came from the estate of Lady Wentworth herself. And closer to home here in the US, there's at least one copy of The Crabbet Arabian Stud available to researchers at the W. K. Kellogg Arabian Horse Library at Cal Poly Pomona!

Let's see what else was available in the way of Christmas horse books around 1960: 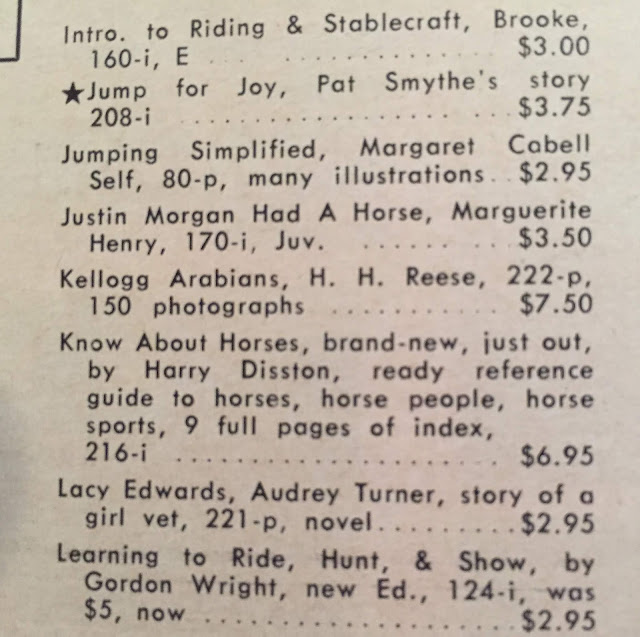 Justin Morgan Had a Horse, by Marguerite Henry. A classic in every sense of the word.  And the foals looked so soft in the illustrations by Wesley Dennis. 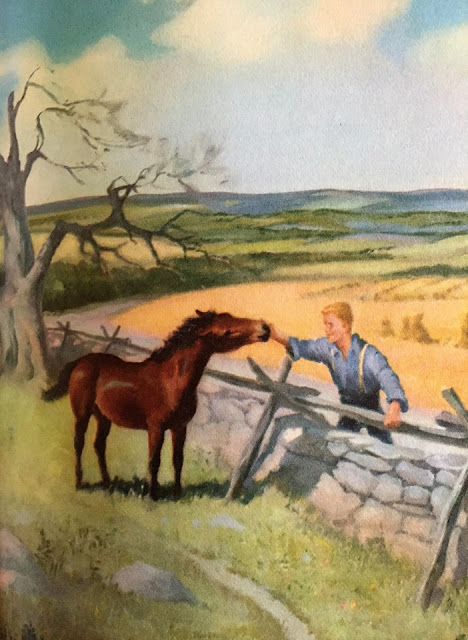 The tiny black-and-white illustrations bring back some memories.... 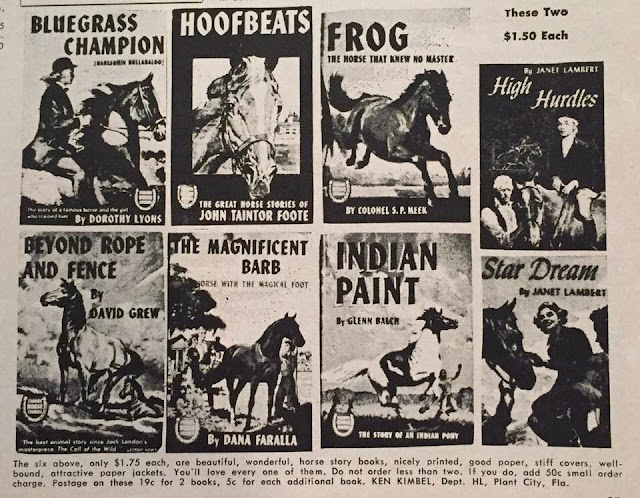 And one more, just for fun:  Bluegrass Champion, by Dorothy Lyons, also illustrated by Wesley Dennis. 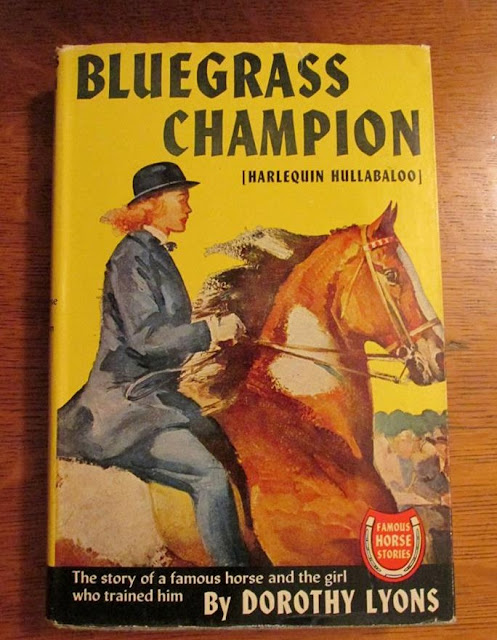 Here's hoping you get some good horse books to go with your model horses for the holidays!  And if you don't, seek them out at used book stores, online, at thrift stores and estate sales.  Read them, read them again, then share them with a kid who likes animals.

Posted by Teresa Rogers at 11:06 AM No comments: 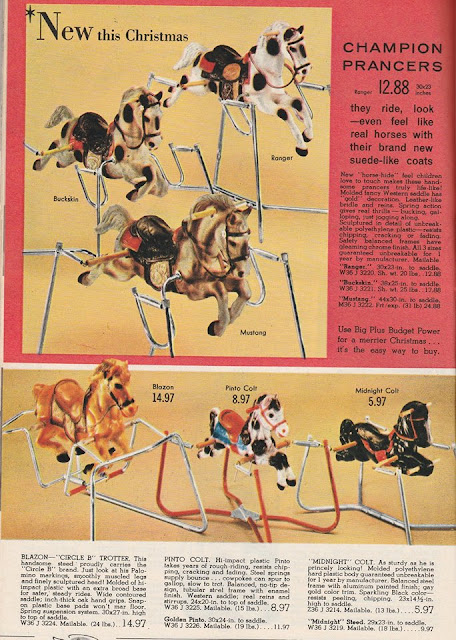 Today is #NationalDayoftheHorse, and of course there is much discussion of this on social media. Some wonder why December 13th would be the National Day of the Horse, as opposed to some other day, but to me it doesn't matter.

That's because we can use today to underscore the importance of giving and receiving horse-shaped objects for the holidays!

I mean, who doesn't want a horse or a pony for Christmas?  But not everyone has the money or the space to take care of a real horse.  For us, there was always the rideable toy horse, often called a hobby-horse, with roots that stretch back hundreds of years.

This morning I went on the venerable Newspapers.com website to look for early examples of horses and Christmas.  The earliest reference I found, in my cursory search, was a clipping from the Newcastle, England Weekly Courant in December 1773.  The paper published a list of books for children available for the holidays.

One of the books was titled "The Hobby-horse, or Christmas Companion."

The Hampshire Telegraph and Naval Chronicle, January 1, 1827, published a long article of rural Christmas traditions. One of them involved a make-believe horse.

"At Abbot's Bromley, in Staffordshire, a curious custom prevailed till lately called "the Hobby Horse," on Christmas Day, when a person carrying between his legs the figure of a horse, made of thin boards, danced through the streets," it reads in part.

The unknown Englishmen who participated in this tradition -- though they may have had deeper cultural reasons for riding stick horses through the streets at Christmas -- have much in common with American kids more than a hundred years later, who also knew the joys of the wooden stick horse.


I found hundreds of articles and advertisements for rocking horses and spring-mounted horses for Christmas, dating back to the late 1800s.  Here's an ad in the Brooklyn Daily Eagle, December 18, 1869.  (Note that the ad above it, is for a pony for sale at Christmastime.)

The spring-mounted horse was still in fashion in the 1950s and 1960s, when a generation of kids enjoyed riding Wonder Horses and similar toys.  You could buy them through mail-order department store and automotive store catalogs, as shown in the photo at the top of this post, or by visiting the store in person.

Show of hands: how many readers had a Wonder Horse or other similar riding toy?  No helmet, no seat belt, no elbow or knee pads.  And all the adventure we could imagine.  That's because during that era, the cowboy and his horse were our heroes. 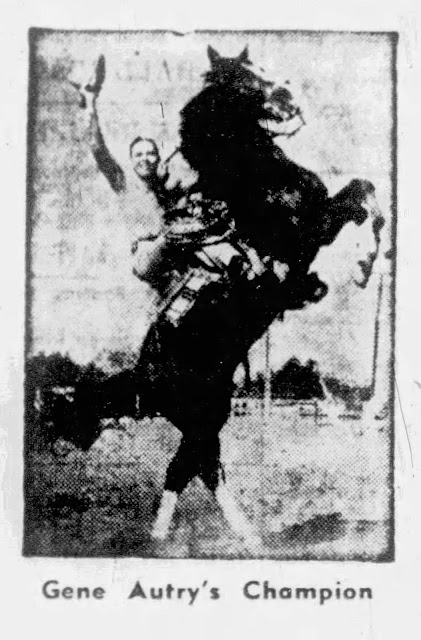 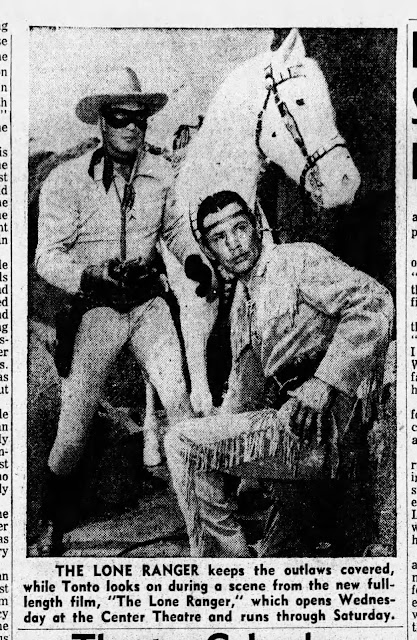 Toys related to cowboys and their horses were ubiquitous back then.  There was a lot of creative advertising promoting rideable toy horses, too. 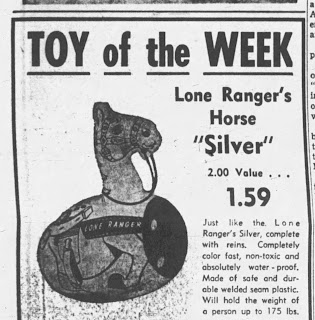 It should not be lost on us that not only is this toy "just like the Lone Ranger's Silver" (that's what the ad says!)-- it also holds the weight of a person up to 175 pounds.

Of course, not everyone's parents could afford a bouncy horse for Christmas, or had the skills to craft one out of wood.  For us, there were other options. 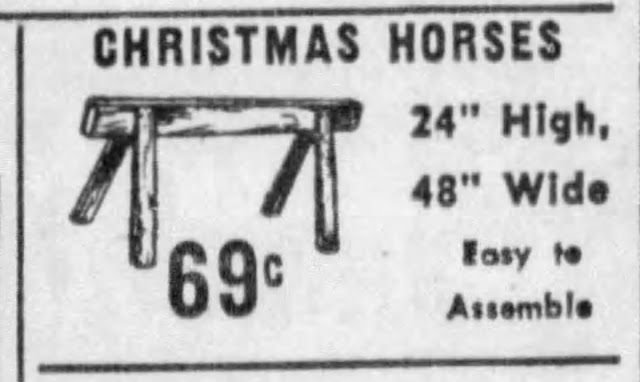 Why didn't the lumber store advertise this utilitarian object as a sawhorse, an essential tool of the construction trade?

Maybe the owner of the lumber store that ran that ad, just before Christmas 1959, knew that the most important part of getting a rideable horse toy for Christmas wasn't just the nature of the horse.  Our enjoyment was as big as our imaginations.
Posted by Teresa Rogers at 9:53 AM 2 comments:

December 10 is the anniversary of the birth of Englishwoman Ada King, better known as Ada Lovelace. Most people who honor Ada Lovelace remember her as a forerunner in modern computer science.

But when I think about Ada Lovelace, I remember the Hagen-Renaker "Ferseyn" Arabian stallion, designed by Maureen Love.
Yes, there is a connection between this "first lady of modern computing" as she has been called, and one of my favorite model horse designs.
Ada King, an Englishwoman born in 1815, is widely acknowledged as being responsible for helping to develop the earliest prototype of a computer. She was the only legitimate daughter of Lord Byron, the renowned poet.

You can read more about Ada's life here:

When Ada's husband William was made Earl of Lovelace, she became Countess Lovelace. William and Ada had a daughter named Anne.

Anne married a writer named Wilfrid Blunt. You can read more about them here:

Wilfrid and Lady Anne Blunt traveled in the Middle East in the late 1870s-1880s and brought Arabian horses back to England, establishing the Crabbet Stud.

Their daughter Judith, also known as Lady Wentworth, sold a number of the descendants of her parents' Arabians to breeders all over the world, including one W.K. Kellogg. The American cereal magnate had established his own Arabian horse ranch in Pomona, California. 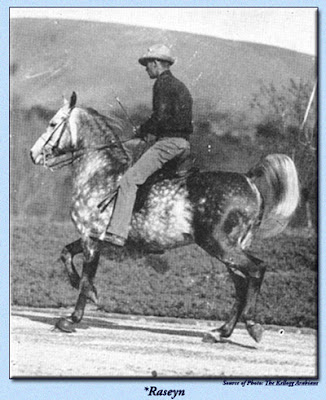 
In the mid-1950s, Maureen Love, working as a designer for the California pottery Hagen-Renaker, sketched Ferseyn and created the mold that became the ceramic Arabian stallion that so resembles the real horse. Maureen was introduced to Ferseyn through Gladys Brown Edwards, the artist and author whose name is most often associated with the Kellogg Ranch and the Kellogg Arabians. Gladys worked at the Kellogg Ranch as a secretary for many years. Her correspondence shows that she not only designed dogs for Hagen-Renaker, but that she also introduced Maureen Love to the Arabians owned by former Kellogg Ranch manager Herbert H. Reese, including Ferseyn and another Kellogg stallion, Abu Farwa. 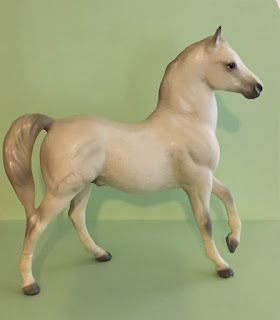 In 1971, Breyer leased the mold and produced the Classic Arab Stallion.

The real stallion Ferseyn was also the inspiration for at least two other Hagen-Renaker molds: the "Abdullah" Arabian stallion, first issued in 1956...

And the "Bedouin" Arabian horse with rider, first issued Fall 1956.

Gladys Brown Edwards' letter about Hagen-Renaker and Maureen Love is part of the collection at the W.K. Kellogg Arabian Horse Library. W.K. Kellogg and GBE's correspondence with Lady Wentworth are on file there as well.

You can find out more about the Crabbet Arabians and their legacy here: