One of Maureen Love's earliest designs for Hagen-Renaker was the B-644 Hackney Pony "Brookside Stella," designed and named after a real show pony. The model was one of two Monrovia HR designs with a foil sticker on the bottom of a base giving information about the breed (the other was the Lipizzan). "Brookside Stella" was first issued in Fall 1956-Spring 1958, reissued Fall 1983-Spring 1985, and later reissued as a Special Run for BreyerFest in 2008.

We know the real Brookside Stella was a pony and not a horse because of book and newspaper records of horse shows during the post-World War II era. Brookside Stella was owned and driven in Hackney Pony harness classes, and later shown in halter, by the redoubtable Southern California socialite Mrs. J.A. Smith. She, along with her husband, owned dozens of Hackney ponies (many of whom had the prefix "Brookside") and Shetland ponies, which Mrs. Smith showed in harness and halter classes around the country, sometimes taking 16-18 ponies at at a time on the road to shows. Brookside Stella's name appears in the show results for Hackneys under 13 hands high.

The earliest records I've been able to find of Mrs. Smith and Stella are from 1949, and the last mention of little Stella I've found was in a photo showing her standing next to her handler at the Smith's pony farm, in a 1955 issue of the Los Angeles Times. Brookside Stella's name also appears in a 1951 newspaper article on the Grand National Exposition, Horse Show and Rodeo at the Cow Palace in San Francisco, as having been "exhibited by Kenmore Stables," and also as being owned by Kenmore Stables at the 1951 Los Angeles International Horse Show. Kenmore Stables was in San Diego, so it appears that little Stella changed hands more than once. She was back at the Smith pony ranch by 1955, though, as we know from the LA Times article from the same year, and from the foil sticker on the base of the HR "Brookside Stella" from 1956.

An interesting footnote to this story is that some of Mrs. Smith's other ponies competed against the Hackneys owned by the Owl Truck and Construction Company, which also owned the team of Belgian horses that included Sespe Violette, subject of another Maureen Love design for Hagen-Renaker, the B-567 Belgian mare of the same name.
My own Monrovia "Brookside Stella" lost her original base over the years, so she now has a new wooden one.

"Brookside Stella" group shots courtesy of the online Hagen-Renaker Museum.
Posted by Teresa Rogers at 8:54 AM No comments: 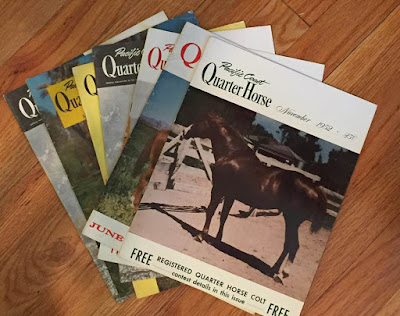 Horse magazines are an important part of the education of the model horse collector, and indeed all horse lovers.  Magazines teach us about horse breeds, about famous horses and riders, stables and horse events.  And when I found some old horse magazines at an estate sale last year, they taught me a little more about the history of the horse in California in the mid-twentieth century.

The ad for the estate sale said the items had belonged to the widow of a man who had been a race horse trainer in Southern California, which of course piqued my interest.  It turned out that not only had Don Early trained Thoroughbreds and Quarter Horses, he had also been the editor of more than one Southern California-based horse magazine in the post-World War II era.

Apparently neither publication lasted long, but they did capture a snapshot in time, when the work of the horse had shifted from agriculture and transportation, to recreation and sport.

This blog post will focus on one of the magazines, Pacific Coast Quarter Horse.  I found issues dating from July 1952 to June 1953.

The cover of the premier issue featured the filly Sue's Joela. 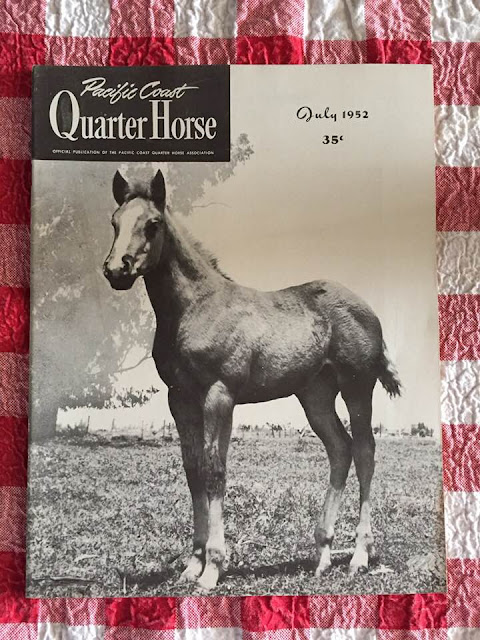 "ON THE COVER -- The intelligent-looking, well-conformed youngster gracing our first cover is the 1952 foal of an Illinois-owned mare shipped to California to the court of Joe Reed II.  The dam is Sue's Answer, by Question Mark out of the Joe Reed mare, Sue Reed."

The  Table of Contents page listed the officers and directors of the PCQHA. 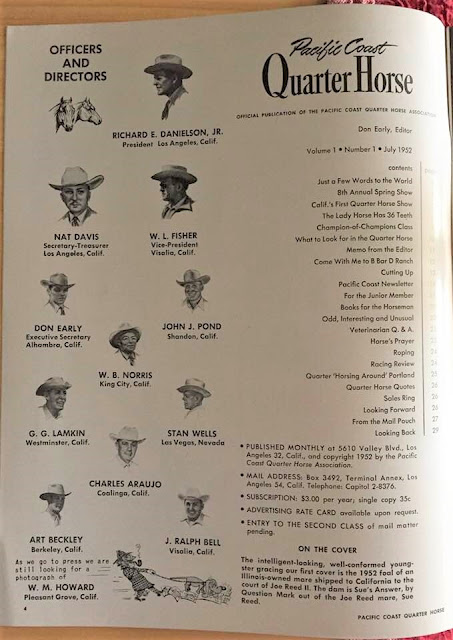 We can see editor Don Early, who saved copies of the magazine for decades, in the middle of the page. 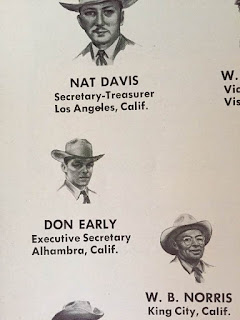 The letter from the president of the Pacific Coast Quarter Horse Association, Richard Danielson, Jr., hoped that "this magazine will make new friends for the Quarter Horse." 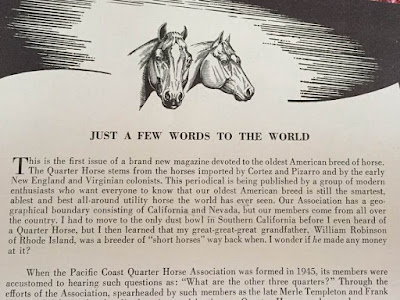 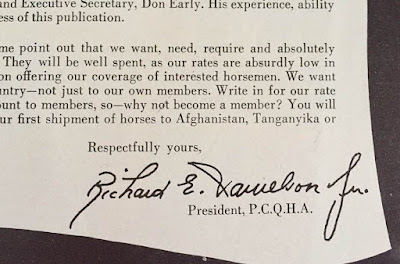 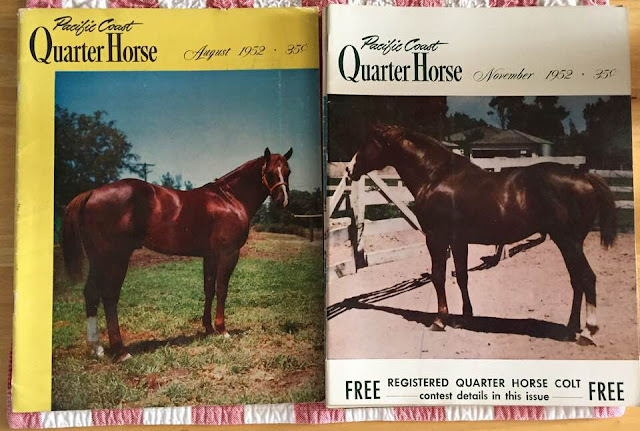 The speedy stallion Senor Bill (Chicaro Bill x Do Good) was featured on the October 1952 cover. 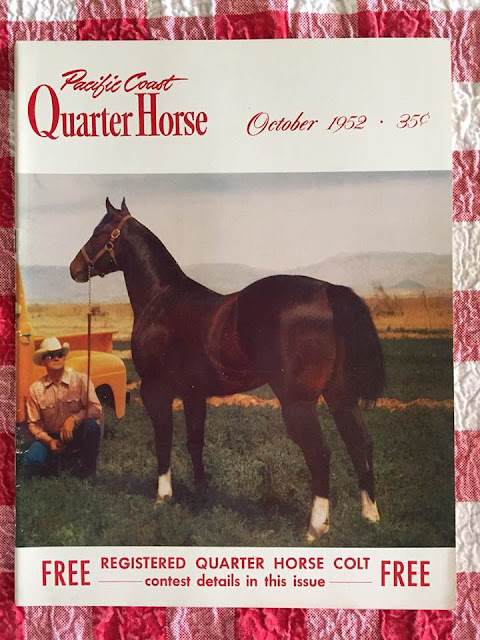 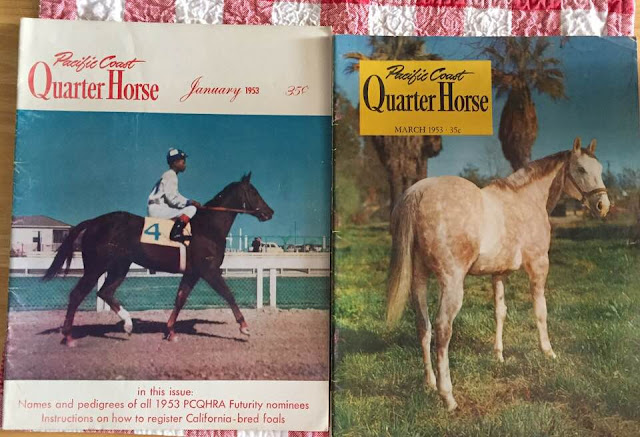 The last issue of the publication at the estate sale, June 1953, featured the venerable stallion Texas Dandy (My Texas Dandy x Streak).  The letter from the president of the PCQHA said that the magazine was struggling due to lack of advertisers. 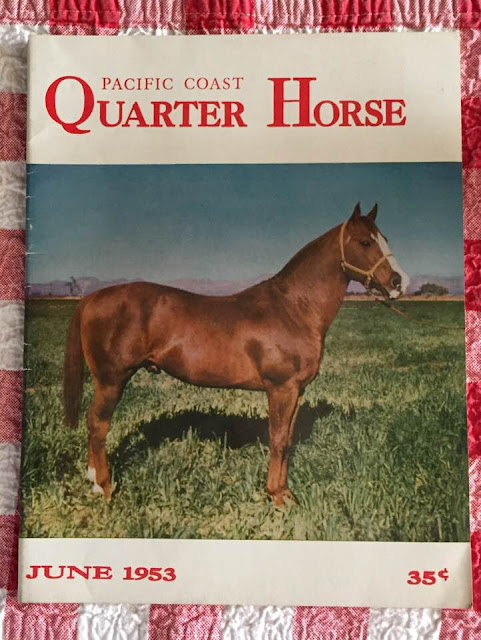 The editor had also saved a small stack of PCQHA letterhead.

What impressed me more than the fact that Don Early had kept multiple copies of each magazine, was the fact that he had also kept some of the original art used in the magazine, inked onto white cardstock.  Many of the pieces were unsigned, but others had been created by noted Western artist and horse trainer Mac McHugh. You can see the printer's markings in pencil on the borders of the drawings. 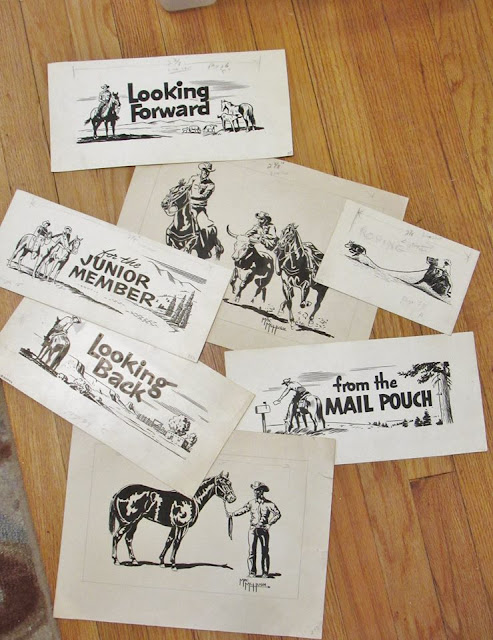 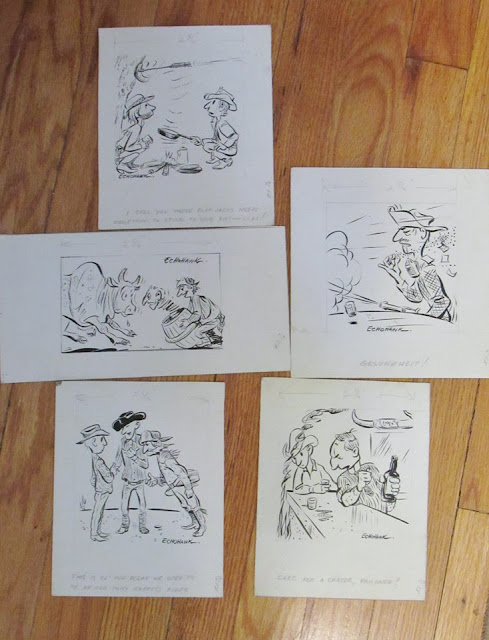 I've donated a set of the magazines, as well as all the original art, to the Special Collections Unit at Cal Poly Pomona University Library.  They specialize in Southern California history, and the collection from the estate of Don Early's widow will help researchers illuminate the history of the horse in Southern California and the United States, in the years following World War II. (Special Collections is also the home of the W.K. Kellogg Arabian Horse Library, which holds information about many breeds of horses.)

I'm sure that others who document the history of the Quarter Horse in the US will be able to provide better context for these copies of Pacific Coast Quarter Horse magazine.  In the meantime, it's a pleasure to show you what I found at this estate sale.
Posted by Teresa Rogers at 5:35 PM 1 comment: