The Enduring Appeal of the Model Horse Conga Dance, or The Chorus Line of the Small Equine 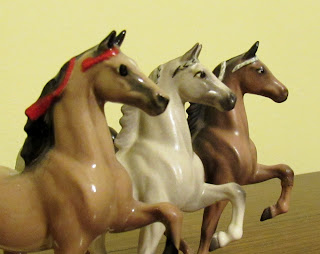 Some of my model horse collector friends and I met recently at an estate sale that advertised model horses. We'd lined up together prior to the sale's start, having agreed to support one another in our quest for the horse or horses we wanted for our own collections.

"I just have to get that model," one friend said to me, of her grail du jour. "I conga that mold."

The verb form of "conga" means to dance that particular dance, but in model horsedom, it has also come to mean collecting every possible variation of a single model horse mold.  (I guess you could also call it having a chorus line of small equines.)

Compared to most of my friends' collections, mine is pretty small. And generally speaking, I don't conga model horses. If I have one copy of a certain mold, I'm pretty happy.

But my recent trip to Breyerfest, a purchase from a friend, and a couple of other lucky finds allowed me to pick up multiple examples of some of my favorite miniature Hagen-Renaker molds: the American Saddlebred, the Morgan stallion, and the standing Arabian stallion.


So many collectors love the A-458 Style One mini ASB. Only three inches tall, it was made in the brown matte and white matte colorways, originally issued between Spring 1959-Fall 1963, and again between Spring 1967-Fall 1969.  In 2006, it was reissued as a black Special Run of 1,000 for the Hagen-Renaker Collectors Club.  It had four different color ribbons and with or without a star marking on its forehead.  The 2007 SR Saddlebred for the HRCC came in four colors, 120 each of four colors, with four different ribbon colors.

I've always had a soft spot for the A-389 HR mini Morgan stallion.

Designed by Maureen Love, he stands 2.75 inches tall at the ears, and was released in matte chestnut and matte palomino from Fall 1959 to Fall 1973. He was re-released in four different glossy colors in 2007; only 50 of each color were produced as part of a set that also featured the mini Morgan mare and foal.

I think the three little stallions in my small conga line exemplify the reason collectors want variations on the same mold.  Look at the differences in their detail, facial shading and expressions.  They're all handsome for different reasons. 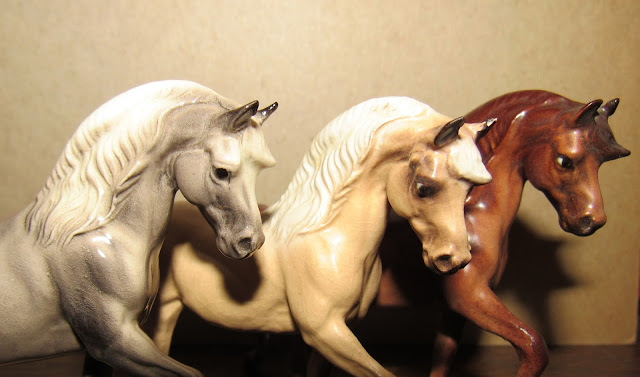 My longest mini HR conga line so far is the A-47 Standing Arabian stallion. Designed by Maureen Love, he is 3 inches tall at the ears and was produced in gray and white matte colors between Fall 1959 and Fall 1972.

I believe I bought my first HR mini Standing Arab stallion from one of the real treasures of the model horse hobby, Linda Walter. Linda has long been esteemed by her fellow collectors as the editor of the Model Horse Showers Journal (back in the day when such newsletters were painstakingly typed and illustrated by hand). Linda was, and is, one of the best at articulating the joy, the history and the ethics of model horse collecting.

I used to tell myself that I only needed one of these little guys.

At Breyerfest in Kentucky this past summer, I ran into Linda in the hallway of the host hotel, and coincidentally came across not one, but four more variations on a theme of mini Arab stallion the same week. (I now have three white and two doeskin; I still need to find one in the older Monrovia rose gray color to have at least one of each color.)


An old fairy tale is told of the Swan Maidens, "each one more beautiful than the other." That principle applies to the conga line of small horses: how could you say which one is "best," when each one has something different going for it?

The one on the far right has great detail on his mane and a sweet expression. The one to his left, has an almost semi-gloss finish.  The one in the middle has the old "comma" eyes from the time when HR was based in Monrovia, California (before the company moved to nearby San Dimas). The second one from the left has nice detail and even shading. The one on the far left may be the best example of all from a technical standpoint: excellent mold detail, even shading, nice eyes. 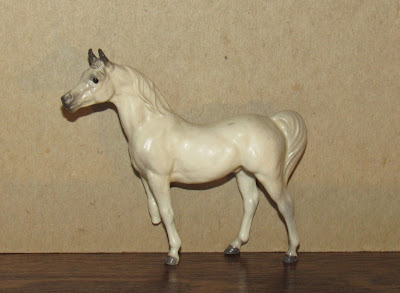 Except that he's missing part of a leg.  But I felt I had to bring him home from Kentucky; I couldn't leave him there....

I think I will send him to an artist friend for restoration. Then he can take his rightful place in the dance of the model horses.

Hagen-Renaker Pottery: Horses and Other Figurines, by Nancy Kelly (a Schiffer Book for Collectors).

Posted by Teresa Rogers at 11:36 PM No comments: