May 30, 1939 was the birthdate of Lippitt Morman, the chestnut Morgan stallion who inspired my favorite Designers' Workshop Hagen-Renaker horse figurine: the B-704 "Lippet."


The HR "Lippet" (as the company spelled it) was first issued in Spring 1959 through Spring 1974 in matte chestnut and matte palomino, then again from Fall 1983 to Spring 1986 in matte and gloss dark bay/brown.  I had a chance to see a variety of these colorways at the recent Clinky Mayhem 2018 event in Southern California.  They had all belonged to the late collector Karen Grimm of Black Horse Ranch.


As was  the case with most of Maureen Love's equine designs for Hagen-Renaker, the real horse was the inspiration for the figurine. Lippitt Morman was bred by the legendary Robert Lippitt Knight.  The stallion's name was a combination of the names of his sire, Mansfield, and his dam, Lippitt Kate Moro.  Knight sold him to a Canadian, W.A. LeBoeuf, in 1943, and in 1946 they became famous for winning the Hundred Mile Trail Ride in Vermont. 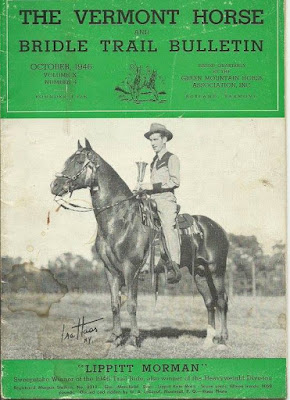 LeBoeuf sold Lippitt Morman to California Morgan breeder Roland Hill in 1947, and shortly thereafter Hill sold the chestnut stallion to his friend, horse rancher Merle Little, who lived not far from Hagen-Renaker and was a friend of the Renaker family. At Little's El Rancho Poco, near what is now the intersection of the 210 Freeway and Mountain Avenue in Monrovia, California, Lippitt Morman was a multi-champion show horse, parade horse (in the Tournament of Roses and other Southern California events), and sire.

He was also, most definitely, a friend of the Little family.  People who knew Lippitt Morman described a horse who was "just Himself" -- a charismatic, self-possessed creature with a twinkle in his eye. 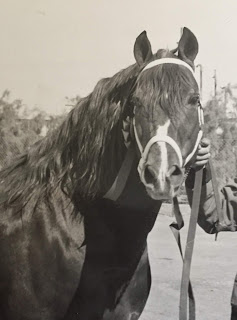 My colleague Dawn Sinkovich has blogged eloquently about Lippitt Morman.  Dawn observes that, based on the number of sketches and pastel drawings of him she made, Maureen Love appears to have been captivated by Lippitt Morman too. You can see some of Maureen's multiple drawings here, along with a picture of a larger, walking version of "Lippet" that was never released by Hagen-Renaker:

Perhaps the most touching tribute about Lippitt Morman was written by his former owner, W. E. LeBoeuf, to Merle Little.  The letter is dated January 17, 1948, and is now in the collection of the W.K. Kellogg Arabian Horse Library at Cal Poly Pomona, only a few miles from the site of El Rancho Poco.  It reads, in part:

"Of all the horses that I have own[ed] and will, He will always be the One that I will remember, never again will I have a Horse that I will love so much as I did Morman, not only because he won the hundred miles but because of the so many good qualities in Him that I appreciated so much... As the old saying goes, You could cut the end of the road with him...."

My own Monrovia chestnut "Lippet" is enjoying a second career now, representing his namesake with other HR figurines designed by Maureen Love, in the exhibit "Miniature Menageries: The History and Artists Behind Hagen-Renaker, Inc." at the W.K. Kellogg Arabian Horse Library (WKKAHL) at Cal Poly Pomona.  He's scheduled to return to the empty space on my shelves in April 2019. 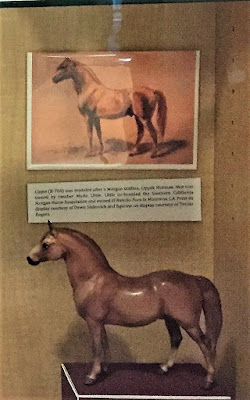 For more information on "Miniature Menageries," visit the WKKAHL web page at:

Posted by Teresa Rogers at 8:26 AM No comments:

This week we celebrate the birthdays of two of the twentieth century's most important Arabian stallions: Ferseyn (May 21, 1937) and Abu Farwa (May 22, 1940).  Their legacy extends from the real horse world into the model horse realm.  Ferseyn and Abu Farwa were both represented in the 2018-2019 "Miniature Menageries" exhibit at the W.K. Kellogg Arabian Horse Library at Cal Poly Pomona, through the art of Maureen Love for Hagen-Renaker.


The real horse Ferseyn, a gray, was the offspring of the preeminent Arabian sire *Raseyn and the mare *Ferda, both of whom were bred by Lady Wentworth at the Crabbet Arabian Stud in England and imported by W.K. Kellogg for his Arabian ranch in Southern California.  Ferseyn was a prolific sire of more than 250 Arabians and, by all accounts, had an "impish" personality that endeared him to his owner, Herbert H. Reese.

The "Ferseyn" mold is probably best known to most collectors as the Breyer Classic Arabian Stallion, issued in many different colors since the 1970s.  Hagen-Renaker leased the mold, designed by Maureen Love, to Breyer.

The real Arabian stallion Abu Farwa was chestnut with white markings.  His roots were also planted at the Kellogg Ranch: his sire Rabiyas and dam *Rissletta were owned by W.K. Kellogg when Abu Farwa was foaled.  Abu Farwa grew up to be one of the most important Arabian sires of the twentieth century: 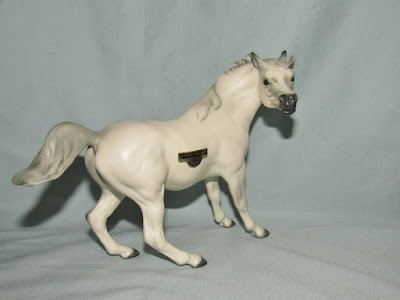 The B-650 "Arabian, Turning" (with his head up) below was designed at roughly the same time as the B-621 Abu Farwa, the mid-1950s, but not issued until 1968. Examples of this mold sometimes carry an old "Abu Farwa" sticker. 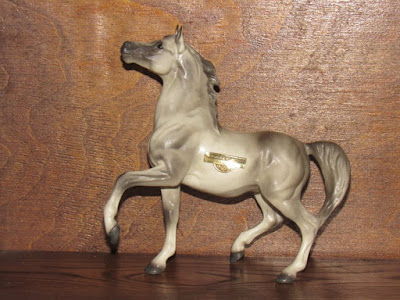 We can infer that the 9" Hagen-Renaker B-656 “Amir” was based on the real Abu Farwa not only from Maureen’s sketches of a prancing chestnut Arabian stallion with a distinctive blaze and on her sketchbook cover notes that name Abu Farwa, Ferseyn, and another Arabian stallion owned by Reese, Alla Amarward, but also from a May 1970 article in Arabian Horse World magazine by Carol Mulder. The magazine issue was a tribute to Abu Farwa, who was one of the most important Arabian sires of the 20th century. In summarizing his life on H.H. Reese’s ranch in the late 1940s and 1950s, Mulder wrote of “Ab” --

“During this period of his life, AB was sculptured by the very talented artist, Maureen Love (now Mrs. Calvert).  The result of her many hours of sitting in AB’s paddock with him is a very true-to-life likeness, which was sold for a short time as well-done, artistic ceramic work.... Imitations formed in some sort of material like plastic seem to be on sale in most drug and/or dime stores.”

Ms. Mulder seems to have been referring to the Breyer Family Arabian Stallion, widely commercially available after the large "Amir" had been retired by HR.  The mold was reissued in the 1980s by HR and is available by special order from the company today.

Here's a link to my previous post about the Breyer Family Arab Stallion:
https://modelhorsefriends.blogspot.com/2017/07/ode-to-breyer-family-arab-stallion-fas.html
Posted by Teresa Rogers at 11:19 AM No comments: